The Greatest Trumpet Of Them All finds Dizzy Gillespie in hard bop mode, assisted by two great talents of the period, Benny Golson and Gigi Gryce. 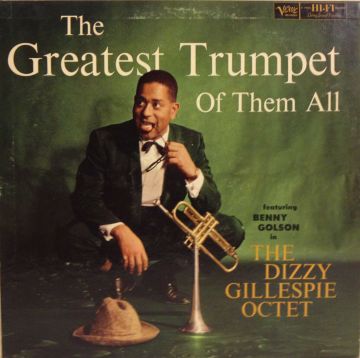 Side A:
Blues After Dark
Sea Breeze
Out Of The Past
Shabozz
Side B:
Reminiscing
A Night At Tony’s
Smoke Signals
Just By Myself


Perhaps we should not take the title – Verve’s uninspired effort to attract customers – too badly. To be sure, Dizzy Gillespie once remarked that Clark Terry was the greatest trumpet player he ever heard. By 1957, Gillespie had developed into one of the great ambassadors of jazz, still playing at a level most trumpeters could only dream of, yet behind him were the feats that had such a pervasive influence on America’s most original art form: Gillespie developed the modern jazz language with Charlie Parker, successfully introduced it to a wider audience, demonstrated unprecedented virtuosity on the trumpet (as direct heir to Louis Armstrong) and made a number of stunning, influential recordings with his Afro-Cuban big bands. A feat lesser-known, but not to be ignored, is his effort to sustain a black-owned record company, DeeGee Records, which was into business from 1951 to 1953.

Inevitably, Gillespie brings a smile to your face. His are happy sounds, vivid, playful, phrases that bubble with life, stories that are varnished with gladness, the promise of progress, an outlook that’s striking in a society prone to suppress the potential of his people, intent on sustaining the status quo. Sure he’s got the blues, his bends and slurs and piercing cadenzas evidently spell it out for you. Still, Dizzy Gillespie seems content. Likely, his life-long marriage to Lorraine has contributed to his well-being. But Gillespie may have been satisfied, he wasn’t complacent. His poignant, playful take on politics and discrimination speaks volumes. In 1964, Gillespie ran as an independent candidate for the Presidential Office, planning to rename The White House as The Blues House and appoint, among others, Duke Ellington as Secretary of State, Miles Davis as Director of the C.I.A. and Thelonious Monk as Traveling Ambassador!

Neither did Gillespie let anyone eat his lunch, white or black. In 1941, Gillespie sat in the trumpet chair of Cab Calloway’s band. The two didn’t get along very well, mostly on account of Calloway blaming Gillespie for his mischievous behavior and complex playing style, infamously dubbed ‘Chinese music’ by the famed singer and bandleader. During rehearsal, someone threw a spitball. Calloway blamed the innocent Gillespie, whereupon the trumpeter pulled a knife, a few minor cuts in Calloway’s leg the result. You can call it what you want, I call it messin’ with the kid…

The Greatest Trumpet Of Them All was recorded on December 17, 1957. On December 11 and 19, Gillespie recorded with Sonny Stitt and Sonny Rollins, two sessions of powerful bebop that would be released as Duets in 1958 and Sonny Side Up in 1959, the opposite of the more mellow and restrained The Greatest. That album bears the mark of Golson and Gryce, who contribute Blues After Dark, Out Of The Past and Just By Myself (Golson) and Shabozz, A Night At Tony’s and Smoke Signals (Gryce). It is completed with Sea Breeze, a Latin-ish mood piece reminding us of ‘commercial’ Cal Tjader. Golson and Gryce were upcoming jazz men, swingin’, smokin’, but more soft-hued than Stitt and Rollins, Golson’s tenor velvet-y, the glow of warm marshmellows adding to a vibrant, comforting style, Gryce’s alto not without bite but suave, favoring fluent lines.

Fire and brimstone is not this album’s core business, instead a mellow vibe set by a responsive rhythm section soothes the soul, with Ray Bryant chiming in with rootsy, eloquent piano playing and the arrangements of Golson and Gryce adding tart harmony and precise, soulful stimulation of the soloists. Gillespie sets the pace, alternating between muted and open horn, sometimes even during the course of one tune – the truly unique composition of Benny Golson, Out Of The Past, practically impossible to fuck up, so beautiful and full of innate lyricism… Golson would record it magnificently, by the way, as a leader two days later, on December 19. So while Golson delivered it on the excellent The Modern Touch album, Gillespie was blowing hard with Sonny & Sonny… Gillespie’s playing moves so effortlessly, a marvel still, even if there is nothing to write up as ‘epic’. To be sure, for Gillespie, a driver at Le Mans, intervals are cinches like hairpins for Steve McQueen – check Smoke Signals. He dives into the abyss courageously, like an eagle in a tornado. The slurred exclamation point puts an end to meandering, meaningfully simple sentences…

Not essential, but fine Gillespie, no doubt.