Drop the needle on the brand-new 45rpm platter by The White Blinds, a cover of Sly Stone’s Sing A Simple Song. 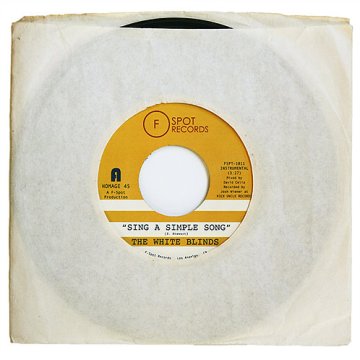 Side A:
Sing A Simple Song
Side B:
Klapp Back


We love those 7inch babies, a format tailor-made for a powerhouse trio like The White Blinds, which while thoroughly up-to-date, harks back to the halcyon soul jazz days, when every joint had a jukebox and Curtis Mayfield, James Brown and a slew of hip and funky organists were the saints that soothed the souls of folks in the hood. The release of Sing A Simple Song/Klapp Back is part of the Homage Series of Los Angeles-based F-Spot Records.

The White Blinds are drummer Michael Duffy, organist Carey Frank and guitarist Matt Hornbeck. The Hammond groove outfit, one of the most prolific organ combos on the West Coast, is a greasy, well-oiled rhythm machine whose version of the flower power funk classic Sing A Simple Song does justice to both Sly & The Family Stone and Charles Earland, the organist known as The Mighty Burner, who presented his killer version on the 1970 Prestige album Black Drops.

The trio’s heavy groove is sustained by precise and powerful drum patterns and breaks, tantalizing New Orleans Funk guitar licks and full-bodied chords and hypnotizing organ lines, which add a drop of acid in a refreshing glass of lemonade.

Find Sing A Simple Song/Klapp Back on F-Spot Records here.