‘Little Bird’ was a nickname that soon wore off as Jimmy Heath developed into a saxophonist, composer and arranger with a singular style. By 1960, Heath had recorded his second album for Riverside, the bright and muscular Really Big!, including, yes, Clark Terry, yes, Cannonball Adderley and, yes, Tommy Flanagan. 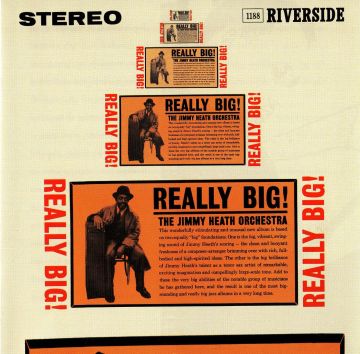 Side A:
Big P.
Old Fashioned Fun
Mona’s Mood
Dat Dere
Side B:
Nails
On Green Dolphin Street
My Ideal
Picture Of Heath


Awhile ago I was observing pianist Barry Harris, 87, who sat listening to drummer Eric Ineke and colleagues play in a cozy club in The Hague, The Netherlands. I realised that I wasn’t only looking at Barry Harris, but also at Charlie Parker, Dexter Gordon, Bud Powell and Thelonious Monk. A giant among GIANTS. The same applies for Jimmy Heath, 90, who titled his memoirs I Walked With Giants and, lest we forget, recorded with Harris on a number of occasions, notably on Carmell Jones’ Jay Hawk Talk (Prestige 1965) and Jimmy Heath’s Picture Of Heath (Xanadu 1975).

Heath has been active since the late forties, when he led his first big band, which included fellow Philadelphians John Coltrane, Benny Golson, Ray Bryant, Cal Massey and Johnny Coles. Subsequently, he joined Dizzy Gillespie’s Orchestra and worked briefly with Miles Davis after Coltrane’s departure from the trumpeter’s quintet. During an impressive career, Heath worked extensively with Milt Jackson, Art Farmer and his illustrious brothers Percy and Albert in the sixties. He worked to a greater extent with them from the late seventies as the exciting recording and working band The Heath Brothers. To his composer’s credit, C.T.A., Gingerbread Boy and Gemini have become standards. The number of features is lengthy. Titles as J.J. Johnson’s The Eminent J.J. Johnson Vol. 1, Miles Davis’ Miles Davis Vol. 2, Nat Adderley’s That’s Right!, Freddie Hubbard’s Hub Cap, Red Garland’s The Quota and Albert “Tootie” Heath’s Kwanza serve as a reminder of the continous high level Jimmy Heath was operating on. Hammond B3 geek info: Heath also appeared on Charles Earland’s Black Drops and Don Patterson’s masterpiece These Are Soulful Days.

Fortunately, quite a few of Heath’s generation are still alive, not only playing but teaching as well. Like Barry Harris, Charles Persip, Harold Mabern and Julian Priester, Jimmy Heath is a teacher. He’s a conductor as well. Heath conducted the renowned German WDR Orchestra a year and a half ago. Reportedly, his methods revealed the sensitivity of an elder statesman for which notation is important but a secondary aspect. For Heath, the motion of rhythm and melody is paramount. He’s funny and points the way with charmingly oblique remarks. Rest assured the band will swing. Truly irreplacable jewels of jazz, these old-school musicians who were close to The Source of Bird and Coltrane and pushed some fat envelopes themselves.

56 years before the event of the WDR appearance, Heath led a band for his Really Big! Riverside date consisting of trumpeters Clark Terry and Nat Adderley, alto saxophonist Cannonball Adderley, baritone saxophonist Pat Patrick, trombonist Tom McIntosh, French horn player Dick Berg, either Tommy Flanagan or Cedar Walton on piano, bassist Percy Heath and drummer Albert “Tootie” Heath. In a thoroughly blasting sound scape, brass and reed do an ongoing paso doble. The sophisticated use of the French horn in the ballad Mona’s Mood and the Bobby Timmons gem Dat Dere is an extra treat. Trumpeter Clark Terry’s another treat, supplying hi-level fun. He soars joyfully and fluently through the changes, demonstrating that his playing in the high-register is nonpareil. Cannonball’s got short spots, yet is his uplifting self and chimes in with some meaty little stories.

Highlights include the band’s mellow but driving take on Dat Dere, the way Clark Terry nails the buoyant theme bookended by swinging 4/4 sections of Nails, Tommy Flanagan’s sizzling bopology (quoting Now’s The Time/The Hucklebuck) of Picture Of Heath and the leader’s gentle but probing reading of My Ideal and driving uptempo tale of Old Fashioned Fun. Much like early Coltrane, Heath favors a multi-note approach. Soaring bop figures segue into wails and flow back to wonderfully constructed lines. Pretty hypnotic. Like Benny Golson, Heath’s ambidexterity is imposing, the blowing deparment equally impressive as his talent for arranging and composing. Really Big’s a superb case in point.