Trumpeter Joe Gordon’s second and last album as a leader, Lookin’ Good, is a major league hard bop album from the West Coast. 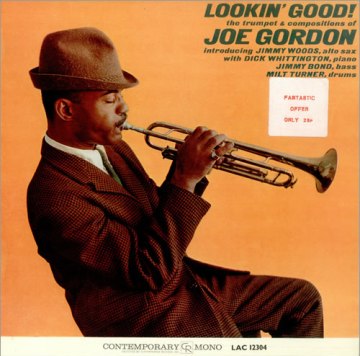 Side A:
Terra Firma Irma
A Song For Richard
Non-Viennese Waltz Blues
You’re The Only Girl In The Next World For Me
Side B:
Co-Op Blues
Mariana
Heleen
Diminishing


Number three, four or five wasn’t to be. Tragically, Gordon died in a house fire in 1963. If only the Boston-born trumpeter could have lived a long life of fulfillment and succes. Or, if that wasn’t meant to be, at least been invited over by the Dutch pianist Rein de Graaff, whose fame in his home country is partly due to the bebop/hard bop courses that he organised from 1986 to 2012, presenting numerous jazz legends and unsung heroes to responsive crowds, like Teddy Edwards, Johnny Griffin, James Clay and Webster Young. As one of the ‘lost heroes’, prime source Gordon would have undoubtedly instructed us with accounts of cooperating with Charlie Parker, Art Blakey, Dizzy Gillespie, Horace Silver and Thelonious Monk, who were, right then and there, creating jazz history.

Gordon did some high-profile side dates: Thelonious Monk’s At The Blackhawk, Dizzy Gillespie’s World Statesman, Art Blakey’s Blakey, Donald Byrd’s Byrd’s Eye View and Shelly Manne’s Live At The Blackhawk I-V. It’s easy to see why Gordon was a highly valued trumpet player. He grabs the listener by the tail from the first note, constructs carefully crafted tales, his buoyancy in mid-and uptempo tunes is contagious while his muted trumpet playing in ballad mode, definitely influenced by Miles Davis, possesses intense, introverted lyricism. A nice pairing with alto saxophonist Jimmy Woods who gives Lookin’ Good that extra, brilliant edge. Woods exploits the limits of the alto, jumps into a lot of mystic corners of the melodies, sets fire to fire without ever loosing a sense of continuity. What a player!

More surprises. At least a couple of tunes swing hard like, say, Art Blakey & The Jazz Messengers, built on a fiery groove by drummer Milt Turner, otherwise known as one of the drummers of the Ray Charles band during Brother Ray’s legendary Atlantic period of the mid-and late fifties, and bassist Jimmy Bond. A question mark as well: who’s playing that nimble piano with shades of Horace Silver and McCoy Tyner? Dick Whittington. Dick who? A feature on Whittington in Berkeleyside explains that the pianist, who still resides on the West Coast these days, started out in the mid-fifties, leading a band including future influential players like Don Cherry, Charles Lloyd, Billy Higgins, Scott LaFaro and Charlie Haden. His career, a mix of far-reaching educational achievements and regular performances in the Bay area, took off in the late fifties and early sixties under the guidance of saxophone legends Sonny Criss and Dexter Gordon.