The career of pianist Carl Perkins was cut short in 1958 by a drug overdose. Sounds familiar? Introducing Carl Perkins is his only album as a leader. 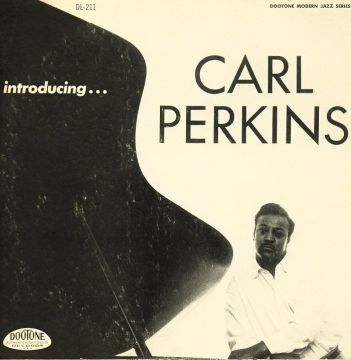 Side A:
Way Across Town
You Don’t Know What Love Is
The Lady Is A Tramp
Marblehead
Woody ‘N’ You
Westside
Side B:
Just Friends
It Could Happen To You
Why Do I Care
Lilacs In The Rain
Carl’s Blues


Born in Indianapolis, Perkins had long stints in the borderland of r&b and jazz with Tiny Bradshaw and Big Jay McNeely, and played with guitarist Oscar Moore, before moving to Los Angeles in the early fifties. Perkins became first pick for incoming leading figures like Miles Davis, Dizzy Gillespie, Max Roach, Illinois Jacquet, Clifford Brown and Frank Morgan and recorded with West Coast residents as Curtis Counce (the bassist’s quintet included Harold Land), Art Pepper (I especially dig Perkins on Pepper’s The Art Of Pepper: The Complete Aladdin Recordings I, II & III) and Dexter Gordon, who lived on the West Coast intermittingly between 1947 and 1959 (Dexter Blows Hot And Cool).

As a consequence of polio, Perkins (like another unsung hero of jazz piano, the recently deceased Horace Parlan) suffered from a disabled arm, the left in his case, earning him the nickname “The Crab”. Perkins put his disability to good use, leveling the arm horizontally and pushing bass notes on the keyboard with his elbow for an extra treat of harmonic and percussive depth, broadening his canvas with orchestral strokes. Perkins is a bluesy player who favors dense chords that keep rollicking right hand lines, occasionally high up the keys, firmly on the beat.

Introducing Carl Perkins represents the major features of his personality, from the jaunty bopswing lines of Way Over Town to the linear approach and old-timey blues licks that tumble over each other of Marblehead and The Lady Is A Tramp, to the evenly paced staccato lines and short-ringing notes that bounce off the fat chords of Just Friends, and the dramatic readings of ballads like You Don’t Know What Love Is and It Could Happen To You, which are a bit too flowery and sentimental for my taste. An all-round package which prompts me to conclude that, if one divides it, the part of the medium tempo tunes as Why Do I Care, Marblehead and Woody ‘N’ You is, ultimately, the long suit of Perkins, or indeed certainly his trio on this date, since the accompaniment of bassist Leroy Vinegar and drummer Lawrence Marable is crisp, responsive and tight-knit.

One album as a leader is a meagre legacy for a talent like Carl Perkins, but that’s the way it went, and more of that jazz.