I can’t tell you how excited I was when I picked up organist Don Patterson’s Cadet album Goin’ Down Home at that indelible Little Giant of a record store, Waxwell Records in Amsterdam. Collector’s frenzy. Shaky hands, dizzy spells, blood pressure climbing high into the sky blue sky… 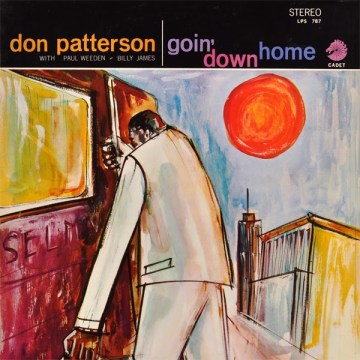 in January, 1963 at Ter-Mar Studios, Chicago

Side A:
Little Duck
John Brown’s Body
I’m Just A Lucky So And So
Frankie MC
It’s Magic
Side B:
Goin’ Down Home
Trick Bag
1197 Fair
Work Song


Why so elated, you ask? It’s hardly one of the Holy Grails of jazz collecting, right?

Because it’s Don Patterson, for Chrissake!

Stumbling upon Goin’ Down Home is bingo for a Hammond organ geek (slash: Don Patterson completist). You’re bound to find one on eBay, but seldom in a record store, at least not in my zip code area. What’s more romantic than zip code area record collecting? It sure beats watching High Fidelity with my favorite inflattable doll.

Goin’ Down Home is Patterson’s session debut as a leader in 1963, but it wasn’t released until 1966. By then, Patterson was one of the premier modern jazz organists. Possibly, Cadet eventually tried to capitalise on the growing reputation of Patterson as an artist on the Prestige label.

I’ve written extensively about Don Patterson in the past. Recap: the Columbus, Ohio-born Patterson was a pianist who, inspired by Jimmy Smith, started playing organ in 1956. The trio of Patterson, guitarist Paul Weeden and drummer Billy James struck up a fruitful cooperation with saxophone giant Sonny Stitt from 1959 to 1964 (Patterson and Billy James kept recording with Sonny Stitt throughout the sixties); Patterson also played on albums of Eddie “Lockjaw” Davis and sax prodigy Eric Kloss. Many of his Prestige albums included the crackerjack guitar work of Pat Martino.

Drugs-related problems haunted Patterson at the turn of the decade. Patterson made a comeback in the early seventies with two albums on Muse, arguably Patterson’s ‘masterpieces’: The Return Of Don Patterson and These Are Soulful Days. Patterson kept performing, if under the radar, till his passing in 1988.

Overshadowed by pioneering legend Jimmy Smith and ‘the Coltrane of organ jazz’ Larry Young, Patterson nevertheless contributed significantly to organ jazz playing. A melodic player and a master of restraint, Patterson squeezed every little bit out of the tenor/organ combo format and cooperated with first-class adventurous musicians as Booker Ervin and Eddie Daniels. Having started out as a pianist, Patterson favored a combination of long, flowing bebop lines and tasteful blues statements.

If not a quantum leap, Patterson’s development from Goin’ Down Home to his official 1964 debut as a leader, The Exciting New Organ Of Don Patterson, is remarkable. His Cadet album fits nicely in the format of the Chess subsidiary label, focusing on basic but nifty r&b and blues lines. A big foot remains in the field of forefather Wild Bill Davis, as Patterson employs a rather dated ‘open register’. It’s the kind of work Patterson delivered on the 1962 albums of Eddie ‘Lockjaw’ Davis, I Only Have Eyes For You and Trackin’ and Sonny Stitt and Gene Ammons’ Boss Tenors In Orbit. Excellent chops, rather cheesy sound.

A smaller foot is set in the area of intense, linear playing with the modern jazz sound as invented by Jimmy Smith. Patterson’s rare ability to stack surprise upon surprise in John Brown’s Body (a tune Patterson played on Stitt/Ammons’ Boss Tenors In Orbit and revisited on Satisfaction) cautiously foreshadows the adventurous hard bop of ’S Bout Time from The Exciting New Organ Of Don Patterson.

A striking aspect of the album is the spirited interplay between Patterson and Billy James. And you’ll want this album for Patterson’s version of Duke Ellington’s I’m Just A Lucky So-And-So. Blues seldom comes as graceful as this.