In it goes, smoothly, like the royal lemon pie of my favorite pattisier. The ingredients of pianist Tommy Flanagan’s debut album as a leader, Overseas, are the best of the best, farm-fresh and complement each other in all sorts of interesting ways. 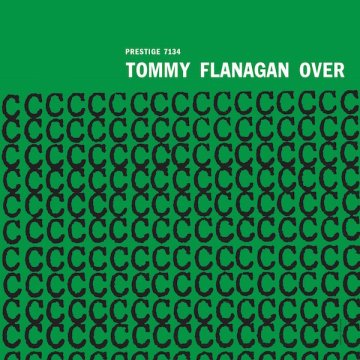 Side A:
Relaxin’ At Camarillo
Chelsea Bridge
Eclypso
Beat’s Up
Skal Brother
Side B:
Little Rock
Verdandi
Delarna
Willow Weep For Me


Listening to Flanagan follow up Charlie Parker’s speed devilish Relaxin’ At Camarillo with the elegiac, orchestral Billy Strayhorn classic Chelsea Bridge is a gift for the auditory senses. Abundant proof of the pianist’s class. A lot of Flanagan’s inventive and influential flair is present on these tunes and album: a striking penchant to alter melodies, often with the use of surprisingly chic dissonance, wonderful continuity of ideas, a snappy beat. Moreover, that triumvirate of talents – let’s make it a foursome adding a delicate yet determined touch – is put to use for creating, as Flanagan once put it succinctly, ‘an overall tonality’.

Ever since arriving in New York from his hometown Detroit in 1956, Flanagan had been in constant demand. Influenced by both the old masters Teddy Wilson, Art Tatum and Nat King Cole and bebop pioneer Bud Powell, Flanagan adapted easily to differing surroundings. For much of the sixties and seventies, Flanagan accompanied Ella Fitzgerald, which prevented him from recording many albums as a leader in the sixties. During the following decades, however, Flanagan sealed his reputation as a master of the trio format. As a sideman in the late fifties and sixties, the pianist not only recorded prolifically with a number of top-rate colleagues like Kenny Burrell, Kenny Dorham, Phil Woods, Dexter Gordon and Coleman Hawkins, but also partook in two undisputed all-time classic albums: Sonny Rollins’ Saxophone Colossus and John Coltrane’s Giant Steps.

How it came about that Flanagan got the lucky break to be involved in Coltrane’s complex masterpiece instead of first choice Cedar Walton is recounted here in a talk of Walton with journalist Marc “Jazzwax” Myers, jazz ambassador sui generis. Incidentally, one of Flanagan’s many Enja albums, 1982’s Giant Steps, is dedicated solely to Coltrane’s masterwork, and masterfully so. Did Flanagan feel the need to prove that his playing had improved since 1959?

Overseas, which was recorded in Stockholm, Sweden while Flanagan, drummer Elvin Jones and bassist Wilbur Little toured with trombonist J.J. Johnson, spawns immaculate, spirited trio work. You will cherish the Elvin Jones masterclass of drumming with brushes. Not only does Jones swing effortlessly, his brush work is probing and highly charged. Very unusual and an absolute gas! The pocket at breakneck speed that Jones and Little lay down in Verdandi – a title and composition that suggest the influence of John Lewis; think Milano or Vendôme – is a dream for a pianist of Flanagan’s capacities, who answers the call with a showcase of virtuosity for beauty’s sake. There are a number of blues-related tunes on Overseas, Flanagan explores the form like a geologist a cave, picking in crevices, drawing back in contemplation, moving on and (unlike many geologists), finding light at the end of the tunnel. The one-minute solo in Skal Brothers, a tune that has a Ray Bryant-feel, is awe-inspiring.

The rumble of Eclypso’s theme is reminiscent of Caravan. Flanagan would re-visit his original tune on the 1973 Enja album Eclypso. By then, the public was used to the release of a splendid Flanagan album. In 1957, the flawless, ambitious Overseas announced the arrival of a leading piano artist with tremendous abilities, charm and vision.