In 1964, Art Farmer and his group toured in Europe. In Sweden, a record official brought up the idea of recording Swedish folk songs. Subsequently, Farmer recorded To Sweden With Love. It’s a splendid example of the way a great jazz musician seemingly effortless brings an alien music form into the jazz realm. 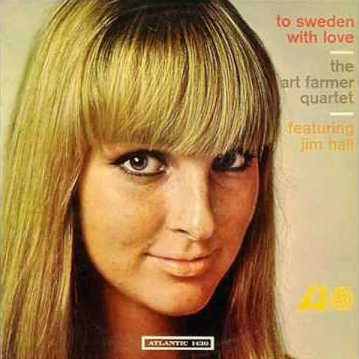 
“Iheard Freddie Webster, and I loved his sound. I decided to work on sound because it seemed like most of the guys my age were just working on speed.” (Jazz Times, 1994)

That worked out nicely for Art Farmer. Coupling a bittersweet, velvet sound to a swift, lyrical style, Art Farmer is able to let your heart melt with just a few notes. The trumpeter, born in Council Bluffs, Iowa, grew up in Phoenix, Arizona and Los Angeles, where he started his career in the late fourties, simultaneously with his twin brother, bassist Addison Farmer. Addison Farmer died of sudden unexpected death at the young age of 34 in 1963. Farmer recorded his original tune Farmer’s Market under the leadership of tenor saxophonist Wardell Gray in 1952. It was his first break. Once relocated to New York, Art Farmer quickly gained recognition as a gifted bebop trumpeter with a distinctive style. Farmer recorded with, among others, Horace Silver, Sonny Rollins, Gigi Gryce and, in the mid-fifties, experimental modernists George Russell and Teddy Charles. During the following decades, Farmer recorded prolifically as a leader for, among others, Prestige, United Artists, Argo, Atlantic, Columbia and Mainstream.

Without a doubt, Farmer’s best known contribution as a sideman occured on January 5, 1958, when Farmer and Jackie McLean served as the horn line for pianist Sonny Clark’s iconic hard bop album Cool Struttin’. Equally renowned is Farmer’s cooperation with Benny Golson in The Jazztet. The group recorded a series of elegant and inventive albums of pure, understated swing like Meet The Jazztet and The Jazztet Meets John Lewis. The Jazztet re-united in 1982. Farmer recorded and performed steadily and succesfully in the latter stages of his career, mostly in Europe, where he found a new home (Vienna, Austria) in the late sixties. Farmer passed away in 1999.

The switch from trumpet to flugelhorn in the early sixties made Farmer’s playing even more uniquely sensitive, cushion-soft. Farmer’s piano-less group of Hall, Swallow and either LaRoca or Walter Perkins on drums recorded three albums for Atlantic: Interaction, Live At The Half Note and To Sweden With Love, which is my particular favorite. (Farmer’s fourth and last Atlantic recording, 1965’s Sing Me Softly Of The Blues included pianist Steve Kuhn instead of Jim Hall)

Something’s missing in the Swedish studio. Indeed, a piano. But it’s not sorely missed. On the contrary, the breathtaking, pretty melodies of To Sweden With Love inspire Farmer’s group to laid-back but dynamic, inventive interplay and the group has an alluring, airy and dreamy sound. To Sweden With Love is a splendid production by producer Anders Burman and engineer Rune Persson from Metronome Records, who are worthy overseas replacements for Atlantic’s distinguished team of chief producer Tom Dowd.

An intriguing dialogue between Art Farmer and Jim Hall is at the centre of the album. Farmer’s lines brim with yearning, joy, tenderness and a shade of tristesse. He throws fragments of love letters to the crystalline, whispered chords of Jim Hall. And Hall, when Farmer lays out, caresses the melodies like a little girl hugging her teddy bear and thereupon fills the empty spaces of the blowing sections with delicate, short notes, much like a pointillist painter treats his canvas. Hall is part prickly pear, part romantic balladeer.

To Sweden With Love is a clear case of puppy love between two uniquely gifted and responsive jazz men.