The coupling of John Lewis, the king of chamber jazz music, as a composer and arranger with The Jazztet in 1958 wasn’t as strange as it looked on the surface. Although co-leaders Benny Golson and Art Farmer lead a cookin’ hard bop ensemble, it was acknowledged for its elegant tunes and meticulous arrangements. The smart arrangements of Lewis fit The Jazztet like a glove. Yet I’m sure that Lewis had not foreseen that the group would deliver the hardest swinging version of Django ever put on wax. 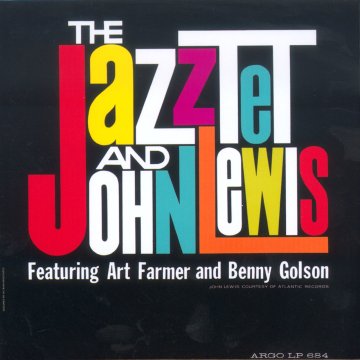 Side A:
Bel
Milano
Django
New York 19
Side B:
2 Degrees East, 3 Degrees West
Odds Against Tomorrow


Lewis, the leader of the amazingly popular Modern Jazz Quartet, always had to tolerate a lot of vitriol. Jazz policemen condemned the group’s stiff concert hall appearances, deeming their hybrid of jazz, classical and third stream music unappropriate, often meaning decidedly ‘unblack’. They hated to see Lewis put the ball and chain on vibraphonist Milt Jackson, who was supposedly bereft of his sparkling blues playing.

If you’re as controversial as John Lewis, you’re bound to be at the right track.

Things were not that simple in the real world, outside policing dreamland. Charles Mingus worked with the ‘suite’-concept regularly. Bud Powell played and incorporated Bach. Many hard boppers had received thorough formal training. And in spite of their classical approach, the elaborate themes of Lewis and pristine solo’s of Jackson revealed their firm roots in bebop and blues.

Hank Mobley’s my main man but is that a reason to put the lid on MJQ? Of course not. My doctor advised me to take it in small doses, though. I once tried to spin MJQ albums back to back while working nine to five at home, but around 2 o’clock I started suffering from an annoying itch all over my body and a mildly disconcerting shudder of the pancreas.

All tunes except Bel were from the MJQ book. Lewis wrote Bel especially for The Jazztet And John Lewis. It’s a sweeping opening statement, consisting of a theme of staccato horn stabs that work like melodious claxons: here’s The Jazztet! The three-horn line-up sounds tremendously powerful. Its propulsive, brassy interludes coupled with the cracklin’ rolls by Albert ‘Tootie’ Heath catapult the soloists into fervent motion.

Django has the same virile, robust edge. It’s taken at a faster tempo than usual, and it’s pandemonium from there. The great asset of Django beside the glorious melody – the tension-release section – is played out by the group to full effect, inspiring Golson and Farmer to the core. It seems Farmer can’t wait as he enthousiastically announces himself at the end of Golson’s solo, weaving in and out of Golson’s sublime, understated swinging statements before his own swift, suave contribution. Another immaculate solo is by Cedar Walton, who plays very fluently in a bag that suggests the influence of both Bud Powell and Bill Evans.

Pastoral tunes like Milano and New York 19 benefit from the warm, breathy sound of Golson and the lyrical style of Farmer. They’ve got plenty of serene background harmony to work with. Odds Against Tomorrow, a composition that Lewis wrote for the movie of the same name (a Robert Wise crime flick from 1959 starring Harry Belafonte), is typical MJQ. Its slow, melancholy introduction, held together by a can’t-get-out-of-your-head four note figure, fugues into an effortlessly swinging, Ellingtonian mid-tempo movement, buoyantly introduced by Art Farmer. The tune returns to a slow outro, leaving us bucked and satiated.

Lewis’ stylish blues tune, 2 Degrees East, 3 Degrees West, is the right material for The Jazztet. Golson tackles the mid-tempo groove with flurries of glorious, off-centre notes. Trombonist Tom McIntosh (a fine arranger in his own right), less virtuosic and imaginative than his forerunner in the Jazztet, Curtis Fuller, contributes a more swing-type solo with an attractive, round, soothing tone.

Musically, it’s a superb album. Production-wise, it’s splendid as well. My copy is on the Dutch Funkler label, released in the same year as the Prestige original. The overall sound is sprightly and upfront. The fat, ‘together’ sound of drums and bass is a gas. Tommy Nola and Kay Norton of Nola’s Sound Studio in NYC did an outstanding job.

John Lewis and The Jazztet did an outstanding job, upping the ante as far as bringing swing to thoroughly written-out material is concerned.