During the sixties organ star Jimmy Smith, who single-handedly turned the Hammond B3 organ into a viable modern jazz instrument in the mid-late fifties, recorded a string of generally very popular big band albums under the guidance of Verve’s succesful producer Creed Taylor. 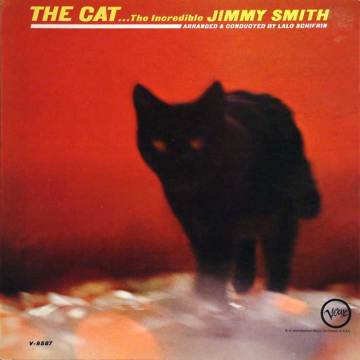 Side A
Theme From ‘Joy House’
The Cat (From The MGM Motion Picture ‘Joy House’)
Basin Street Blues
Main Title From ‘The Carpetbaggers’
Side B
Chicago Serenade
St. Louis Blues
Delon’s Blues
Blues In The Night


The first tentative effort, Bashin’ (side B was dedicated to trio work only) was an immediate smash hit. The best of those albums, like Hobo Flats, Any Number Can Win and Who’s Afraid Of Virginia Woolf involved meaty brass and reed support that stirred up the organist’s inimitable bebop and blues runs to fiery heights. A couple of albums suffered from mediocre, overproduced arrangements and the organist’s wish to put his ‘singing’ abilities in the limelight. Stay away from 1968’s Stay Loose would be my advice, unless you need to chase away the neighbour’s pet alligator.

1964’s The Cat finds Smith at the height of his popularity. The title track is what you’d call a mod classic. Meaning a bunch of English geeks got hip to it in the eighties and started spinning it in the big city’s burgeoning underground clubs, to much acclaim. Understandably, since The Cat’s a blast from start to finish, an uptempo swinger with a firm backbeat and full-bodied, sweeping Lalo Schifrin arrangements which are cut through by boiling Smith phrases.

Old warhorse Basin Street Blues is another highlight, taken at a brisk pace with funky Chicago blues support by drummer Grady Tate and sparse orchestral blasts. Theme From ‘Joy House’ and Main Title From ‘The Carpetbaggers’ are uptempo gems as well, more satisfying in the end than solid but more commonplace slow blues tunes like Delon’s Blues and Blues In The Night.

The Cat is part of the proof that, when in the right surroundings, Jimmy Smith raised the mixing of organ and orchestra to another level.