Benny Golson’s extraordinary writing skills often overshadow his gifts as a tenor saxophonist. As early as 1958, Riverside considered this fact and chose to highlight his tenor work naming Golson’s third album The Other Side Of Benny Golson. Not surprisingly though, the compositions are killer bee as well. Two birds killed by one stone. 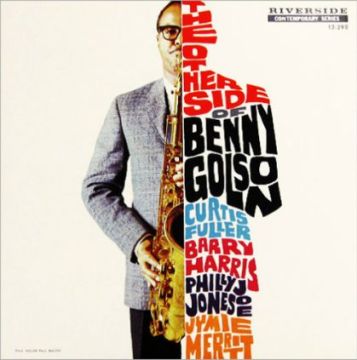 Side A:
Strut Time
Jubilation
Symbols
Side B:
Are You Real?
Cry A Blue Tear
This Night


The significance of Golson, who turned 87 on January 27, can’t be overstated. Having learned the trade from pianist and renowned tunesmith Tadd Dameron in the early fifties, Golson developed into a striking composer. Many of Golson’s compositions became standards: I Remember Clifford, Stablemates, Killer Joe, Along Came Betty, Blues March. The latter two ended up on Art Blakey And The Jazz Messengers’ classic album Moanin’. Golson, beside playing tenor, organised that band, creating a line-up of Philadelphia pals including future trumpet star Lee Morgan. He streamlined Blakey’s profile and business and as such formed the blueprint of succes for the fledgling Art Blakey. Golson’ Jazztet (Personel varied apart from key member Art Farmer; the quintessential line-up included Curtis Fuller) broadened the jazz horizon with sophisticated yet swinging stuff. They re-united in 1982. By then, Golson had been off the jazz scene for nearly 15 years. Following the footsteps of Quincy Jones and J.J. Johnson, Golson spent the latter part of the sixties as well as the seventies in Hollywood, scoring films and series.

Elegant compositions, fascinating voicings, surging but also quaintly cerebral lines: pure Benny Golson. It’s all there on The Other Side Of Benny Golson, the first recorded collaboration between Golson and Curtis Fuller. Golson sounds simultaneously smooth and gutsy and has a way of choosing interesting, odd notes all the time, cooking in understated fashion. For all his inventive composing and blowing, both feet of Golson stand firmly in the soil of tradition. The breathy sound that Golson displays, notably in his original ballad Cry A Blue Tear, reflects his admiration for swing giants like Ben Webster. Golson’s phrasing would’ve been an asset in Ellington’s orchestra.

The beautiful, often dreamy colors that Golson creates with the intriguing tenor-trombone combination account for much of the enjoyment of this album. Fuller smoothly weaves in and out of the theme of Are You Real?, another instant classic of Golson. How Golson cooks in his own way is evident in Strut Time, a lively stop-time tune in which Golson continually stacks one canny idea upon the other. Original stuff. Symptoms is an equally alluring melody, the musical equivalent of fog that hangs over a lake at the dawn’s early light. It includes a poetic trombone solo by Curtis Fuller. Then Golson opts for a contrast, stoking up the fire with fast flurries of notes, elements that Golson incorporates matter-of-factly into his sophisticated style as a tenorist.