Very little is known of organist Sam Lazar’s life. The liner notes of his early sixties Argo releases represent about the only information available. He hailed from St. Louis and played piano in the groups of Ernie Wilkins and Tab Smith, when a gig he attented of modern organ jazz progenitor Jimmy Smith inspired him to take up the Hammond B3. 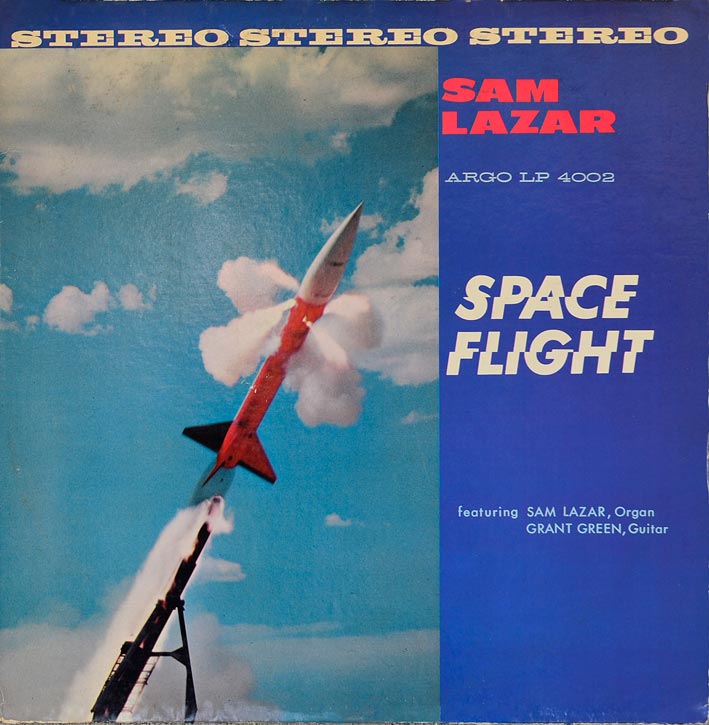 
Liner note writer of Lazar’s Argo debut Space Flight, DJ E. Rodney Jones, praises Lazar as ‘the best organist now playing jazz’, which is goofy, considering his mention of master Jimmy Smith. Biased or perhaps intent on sales, Jones ignores the facts that Wild Bill Davis was generally acknowledged as a pioneer of pre-modern organ jazz and that the start of the sixties brought a batch of top notch, tasteful players such as Shirley Scott and Jimmy McGriff, who were more advanced than Lazar.

It’s not a put-down of Jones, who was an important black radio pioneer. It’s just to be taken with a grain of salt. And though Lazar may not be part of the Hammond major league, he deserves his place in organ jazz history. Of his three Argo releases – the other ones being Playback and Soul Merchant – Space Flight is the most alluring, containing snappy, unpolished r&b-type tunes and furthermore, remaining relevant for including fellow St. Louis musician Grant Green, the unsung hero of modern jazz guitar.

Space Flight was Green’s second recording. (following Jimmy Forrest’s All The Gin Is Gone of December 1, 1959) Green was part of Lazar’s working band. Just a while later alto saxophonist Lou Donaldson would introduce Green to Alfred Lion and Green’s Blue Note and New York career would be underway. A little research proves my point that, in contrast to general opinion, the late fifties 45rpm single that the tiny label Cawthorne released of Sam Lazar, Space Flight part 1/part 2, was Green’s recording debut instead of the Jimmy Forrest album. (Space Flight part 2, by the way, is represented on the album titled Big Willie)

Green delivers a series of fleet, blues-drenched solo’s, that make it easy to imagine why he was already making such an impression on fellow musicians. The flagwaver Gigi Blues, Mad Lad and the heavily shufflin’ title track are cases in point.

Argo was a subsidiary of Chess Records, Phil and Leonard Chess’ legendary Chicago label that trusted heavily on Dixon’s input. The overall sound of the session is pretty distorted, not unlike that of the era’s Chicago blues music. The kind of raucous music that grew out of and boosted black neighbourhood life. Grant Green’s sophisticated playing style contrasts well with the straight-laced surroundings.

Lazar puts in a couple of solo’s that sound-wise place him in the realm of swing rather than modern jazz. Style-wise, Lazar shows some signs of modernity, particularly in the album’s highlight, the dynamic and fleetly phrased Mad Lad.