Jazz is also for dancing and sometimes it prompts me to do just that. Honestly, do you really think I’m cookin’ on another planet when I admit that Ray Bryant got me shufflin’ through the living room like the juke joint customers of lore? You gotta be kiddin’. 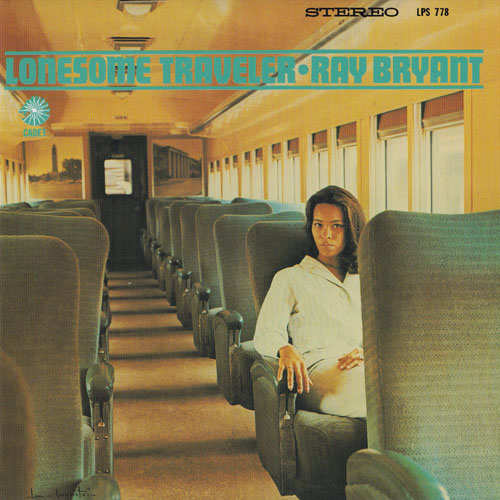 in September 1966 at RCA Studios, NYC

Side A:
Lonesome Traveler
‘Round Midnight
These Boots Are Made For Walkin’
Willow Weep For Me
Side B:
The Blue Scimitar
Gettin’ Loose
Wild Is The Wind
Cubano Chant
Brother This ‘N’ Sister That


Lonesome Traveler is one of pianist Ray Bryant’s grittiest recordings and his second album on Cadet – the subsidiary of Chicago blues and r&b label Chess. The other ones that fulfill Bryant’s ‘Travel’-concept trio of albums on Cadet are (the equally exciting) Gotta Travel On and (the slightly under par) Slow Freight. By 1966, Bryant, a pianist with a lot of gospel and blues feeling and an uncommonly firm, propulsive left hand had a satisfactory decade to look back upon. Appreciated by colleagues, the Philadelphian had recorded with Art Blakey, Miles Davis, Dizzy Gillespie, Coleman Hawkins, Max Roach and Sonny Rollins, among others. Bryant was a noted composer of catchy tunes and a popular leader in his own right. The Madison Time (which went number 30 on the Billboard chart and number 5 on the r&b chart), Little Suzie, Monkey Business and Cubano Chant are well-known Bryant compositions.

Cubano Chant was recorded by Art Blakey and Bryant on Blakey’s album Drum Suite in 1957 and Bryant re-visits it for Lonesome Traveler. It’s one of the examples on the album of the great left hand playing of Bryant, a feature that suggests the influence of the boogiewoogie masters, highly proficient and entertaining. Coupled with a strong and fluent right hand, this album is full of gems, of which the version of Lee Hazlewood’s song These Boots Are Made For Walkin’ (of Nancy Sinatra fame) is absolutely crazy! The combination of Freddie Waits’ backbeat and Richard Davis’ bass (especially the strongly plucked, well-known ascending bass figure) is irresistable. Ray Bryant’s voicings of the theme near the ending are smart and mix well with the flugelhorns, which are added throughout the album for harmony only.

Willow Weep For Me has another fine Bryant solo, an ongoing, virile flow of ideas. Ray Bryant really likes to play. He also doesn’t shy away from transforming Monk’s great ballad ‘Round Midnight into a medium-tempo bossa tune, which builds in tension, swinging ebulliently like Oscar Peterson. Bryant reserves ballad mode for Wild Is The Wind, a tender and intricate winner. Never a one trick pony, Bryant rounds off the album with the down home mover Brother This ‘N’ Sister That. Innate tradition, a bag of blues and exciting modern jazz playing all-in-one.