As a soloist in the Parker tradition, Cannonball Adderley took New York by storm in 1955, releasing solid albums for various labels in the following years. After a succesful stint of fourteen months with Miles Davis, contributing to quintessential albums such as Milestones and Kind Of Blue, at the end of 1959 Julian “Cannonball” Adderley really had got his act together band-wise. Brother Nat rejoined Cannonball after a variety of jobs, (J.J. Johnson, Woody Herman) landing safely in front of the red hot rhythm section of drummer Louis Hayes and bassist Sam Jones. The fruits of this renewed Adderley labor – The Cannonball Adderley Quintet In San Francisco and Them Dirty Blues – created quite a buzz through a succesful marriage between bebop and the soulful, funky side of jazz. 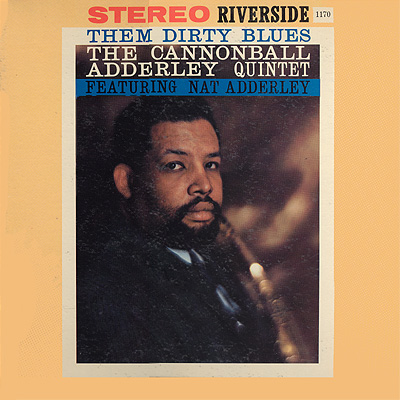 
The title track is indeed a low down and dirty blues, yet in spite of its juke joint charisma, as far as excitement is concerned stays a mile or so behind the three well-known classic cuts of the album, Work Song, Dat Dere and Duke Pearson’s Jeannine. Nat Adderley’s Work Song is one of the modern jazz gems. It still sounds fresh and fiery after all these years and through its imaginative theme and on-target breaks keeps reminding us of the Southern chain gang and the way it used song for dearly needed discipline and comfort.

Nat Adderley recorded his signature tune just a couple of weeks earlier, on January 27, 1960, on his Riverside album Work Song. It’s an unusual take including pizzicato cello and although Hayes and pianist Bobby Timmons are also present, as well as master guitar player Wes Montgomery, it lacks the fire and urgency of the Cannonball Adderley Quintet’s effort.

Bobby Timmons’ Dat Dere, a gospel-tinged beauty, has an interesting bridge after the stand-out solo’s of the brothers Adderley and Timmons, consisting of a few jumpin’ choruses and a return to the sassy melody via a variation on that melody; simultaneously soulful and intelligent. During the recording of Them Dirty Blues, Timmons returned to Art Blakey’s group. They recorded a typically swinging and robust Dat Dere for the album The Big Beat a couple of months later in 1960. And Bobby Timmons’ trio take on his first album as a leader, This Here Is Bobby Timmons, recorded in the time span between Adderley’s en Blakey’s sessions, conceivably is injected with even a bigger shot of gospel feeling.

The swinging Jeannine by Duke Pearson possesses a relentless drive. Cannonball wraps original phrases around the theme and the build-up of his solo is immaculate. Nat Adderley plays fluently and ends his turn on a note of exuberant joy. Louis Hayes and Sam Jones are responsible for a big part for the smoothly running train that is Jeannine. Three years of experience for Hayes as drummer in Horace Silver’s outfit indelibly left its mark. Sam Jones shows that he is one of the foremost executioners of the walking bass. Jeannine ends on a bass chorus, which is only appropriate, bearing in mind Sam Jones’ down-home, solid bass sound.

Jones also contributes a composition. The melody of Del Sasser sounds like one of those instantly recognizable Gerry Mulligan tunes, but inserted with much heavier swing.

Amidst upheaval in the jazz world at the end of 1959 – Ornette Coleman and his melodic and harmonic inventions inspiring unheard of controversy, and as the title of his third release somewhat hyperbolically stated, shaping the jazz to come, John Coltrane breaking serious ground with landmark recording Giant Steps – the joyful, funky and smart Them Dirty Blues nestled in the hearts and minds of audiences and musicians, firmly reminding them of the roots of jazz. Arguably, this particular (brand-new brand of funky jazz from The Cannonball Adderley Quintet laid down an evenly valid groundwork for the future.