I’ve been on the lookout for snippets of Pat Martino ever since my college years. Once there was a guy in college who asked me about my favorite jazz guitar players. When I mentioned that one of them was Pat Martino the guy, a sophomore guitarist, sneered: “O, that single-line player.” I’m glad I’ve never seen that guy since, I need him as a hole in the head. He’s probably drooling over the umteenth remastering of Kind Of Blue. So very sound. 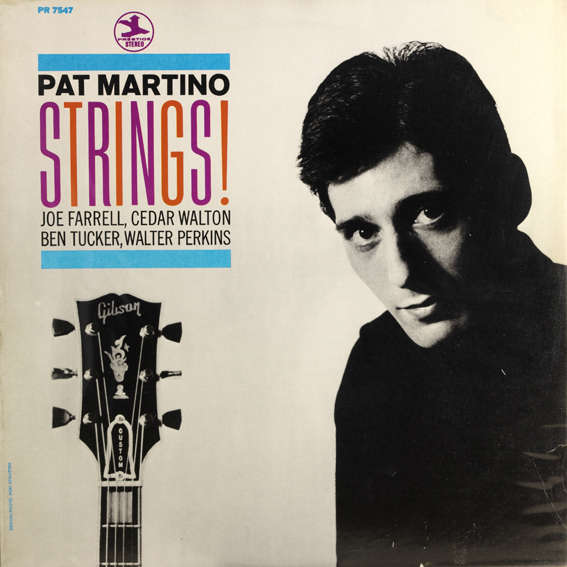 Side A:
Strings
Minority
Side B:
Lean Years
Mom
Querido


Naturally, Mr. Kind Of Blue had every right to his own particular tastes. Yet, in denouncing Martino as merely a player with a ‘lineair conception’, he obviously was oblivious to the emotional effect of Martino’s approach; and furthermore traded objective critique for subjectivism. Because surely it would be hard to find a Pat Martino record or side date on which the single-line maestro omits Wes Montgomery-style octave playing.

It’s there on Strings!, Martino’s second album on Prestige in 1967; particularly in Minority, Gigi Gryce’s Impressions-type composition, a driving piece in which Martino’s pyrotechnical, flowing statements create a whirlwind of ecstatic feelings. And pianist Cedar Walton is in fine enough form to follow this up with perhaps a just as impressive solo.

One would expect a breather after this, but what follows in the footsteps of Minority, Lean Years, is the same type of tune, but less interesting compositionally, and a bit crudely formed. It doesn’t seduce us enough to take heed of the solo’s.

Two more originals encompass the start and finish of the guitarist’s endearing follow-up to his debut on Prestige El Hombre. Opener and title track Strings! is a real treat. It consists of a smooth, effective Latin rhythm made up off drums and percussion and a joyful theme flavoured with thrilling breaks, stated by Joe Farrell’s flute and Martino’s guitar, that intelligently alternates between licks and chords. Reedman Farrell proves to be a proficient flutist and Martino an astute improviser, not interested in virtuosity for virtuosity’s sake, but instead in what it brings about as concerned to feeling.

Strings! is the most enjoyable tune of the album, but Querido, the last track, has the same Latin-American atmosphere and is also worthwhile. Mom is a slow mood piece that basically revolves around three chords, in which not much is happening until the third minute, when Martino follows up ebullient romantic with hard speed phrases. Other ballad work of Martino of this kind comes to mind, such as his contribution to Embraceable You from Don Patterson’s Four Dimensions. Martino’s comprehension of balladry is striking.

Early Martino was a striking period. With or without single lines.