Manhattan Fever is Frank Foster’s best known solo album, arguably because it’s on Blue Note. It’s one of his best as well. Some hard bop statements may come a few years after the fact, it’s an exhilarating affair of top-notch writing and Foster solo’s. 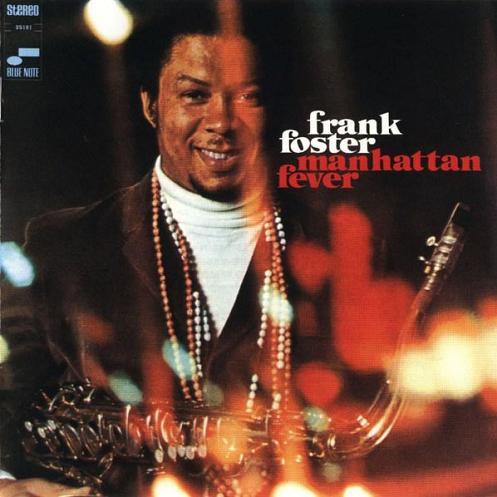 Side A:
Little Miss No Nose
Manhattan Fever
Loneliness
Side B:
Stammpede
You Gotta Be Kiddin’
Seventh Avenue Bill


Well versed in both, as well as in bebop, Foster was without a doubt an all-round musician with a taste for adventure. His particular style of tenor playing led to a string of high profile dates in the fifties and sixties with, among others, Monk, Milt Jackson and Elvin Jones, and a series of solo recordings on a diversity of labels, of which Prestige’s Fearless Frank Foster is particularly good. His swing date No Count and freak out free jazz fest The Loud Minority are less interesting. But for sure, Foster’s solid work on other artist’s recordings make up for an occasional minor mishap. I’d say Foster’s 1954 debut on Blue Note, Here Comes Frank Foster counts as a suave and smoky alternative to the work of contemporaries Sonny Rollins and Stan Getz.

In 1968 Frank Foster was back on Blue Note, a move instigated by colleague and Blue Note artist and A&R manager Duke Pearson. It shouldn’t have been a surprise. Both were in possession of a dose of writing and arranging skills well above average. Those talents are exactly what makes a big part of this album of excellent quality. Stamppede, for instance, does more or less what the parafrased title suggests; an uproar started by the heavy drums of Mickey Roker, it’s a rollicking rush, yet neither evolving into panic, nor in frenzy, but instead being controlled by a solid three horn arrangement. It makes the song sound like one of a big band. It’s a method Foster employs on all tracks. On You Gotta Be Kiddin’, another catchy, heavy swinger, it also works particularly well; it’s a craft Foster honed during his decade-long cooperation with Count Basie.

It’s apparent that Foster’s writing and arranging bring out the best in his sidemen on the ‘modernised’ swing-type songs. When the material is less interesting, as is the case with the title tune, the solo’s become a bit longwinded. Manhattan Fever is impressive at first hearing, but the blowing, except for Foster’s, lacks guts. No Sidewinder fire here.

Finally, Seventh Avenue Bill is an outstanding, complex coda to an eclectic album that very articulately speaks to both body and intellect.