If you like your funk down on the ground, be sure to grab a copy of Jimmy McGriff’s Electric Funk. Listening to McGriff’s essential grooves, you would expect Sly Stone to break in any minute ad-libbing ‘thank you falettinme be mice elf agin.’ 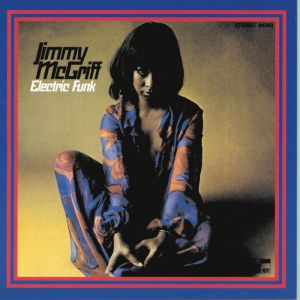 
Funk? Sly? You are on a jazz site? Yes, you are. The chameleonic character of one James Harrill McGriff is almost – or definitely – depending on your view of Sun Ra’s case load, without peer, and he appeared to be so fond of making any kind of popular music that crossing boundaries, and in the proces crossing over to a white market, seems but an afterthought. From creating a buzz in the r&b market in 1962 with a raucous Hammond take on Ray Charles’ I’ve got a woman, prolonging it extensively by a string of exciting and succesful records on the Sue label, thereby touching base in Europe as well, (his singles even went as far as homerunning into the modest collection of my dad, a middle-class Dutch son of a baker, a collection in which Chuck Berry, Buddy Holly and a string of French chansonniers were most prominent) to club blues and jazz organ music in Jimmy Smith mode for Afro-Americans as well as Caucasian Amphetamine’s Annies, to the funk period of which we now speak, comprising a perfect dance mix for the groovy crowd on the Soul Train show, McGriff wore a smile that many surely remember as bright as the lights of the big city.

For today’s clientèle, my little discours may seem insensible. Because nowadays crossing boundaries is of course as normal as peeling a banana during lunch break. It is however mainly part of the corporate deal and often more a gimmick than a well thought-out musical strategy and a far cry from the fresh approach that flavored the times-that-were-a-changin’. I will certainly not protest against the opinion that Sonny Lester’s (Lester produced McGriff on his label Solid State between 1965 and 70 and on Groove Merchant between 1971 and 1976) strategy to steer the organist to the island where the treasure lay, any island, may it be one full of hippies, or Count Basie buffs, or ‘teenypoppers’, or the blues crowd, led to recordings of varying quality – McGriff’s blues oeuvre in particular is, I feel, slightly repetitious; yet one surely must agree that the freedom McGriff was granted also led to a couple of soul jazz gems. Remember The Worm?

It is unclear if Sonny Lester, who is credited as producer, really was around. Anyway, recording of Electric Funk must’ve been a ball. Arguably, McGriff and co-writer/electric pianist Horace Ott had so much fun cookin’ up funkadelic tunes that they thought, well, let’s try another one in the same vein, and now in the key of B minor! I prefer this album to his so-called classic Groove Grease, its spot on coherence to the latter’s groove that’s not that greasy as the title (and bluntly blaxploitative cover) promise it to be.

Opener Back On The Track immediately sets the pace – bass so deep it hurts, soulful, rimshot-packed drums, a lush reed and brass orchestration with unexpected hooks and on top of that the meandering lines of McGriff’s keys, full of surprises and castles of thought constructed from Chicago West Side bricks. The whole serves as a blueprint of soul-funk Donny Hathaway was about to cough up live and makes for a nice companion to your classic blaxploitation movie soundtracks. (less sexist than Groove grease’s or suggestive than Soul Sugar’s front covers, Electric Funk’s picture nevertheless brings the message home)

And tension remains. Medium-tempoed with the exception of Blood, Sweat & Tears’ Spinning Wheel, this is a considerable succes.