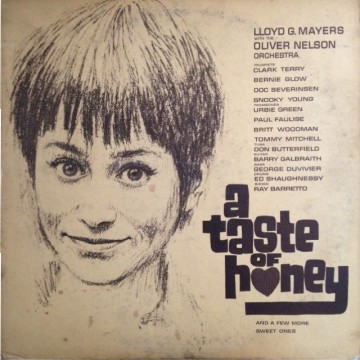 Side A:
A Taste Of Honey
Desafinado
The Good Life
Going Up North
Side B:
The Golden Striker
For All We Know
Jacky-Ing
Alone Together


His name may sound like a movie tycoon but Lloyd G. Mayers was a jazz cat. A swinging cat that has decidedly performed under the radar. Presumably, Mayers was based on the West Coast. He was the pianist on tenor saxophonist Sam “The Man” Taylor’s Plays The Black And The Beautiful and organist on Lou Donaldson’s Rough House Blues in 1963. He also played piano on Oliver Nelson’s Impressions Of Phaedra, issued on United Artists in 1962. Coincidentally, A Taste Of Honey was also released by United Artists in 1962. Furthermore, the personnel is virtually similar. My guess is that, when CBS commissioned Nelson to record the soundtrack to the TV movie A Taste Of Honey, the credits somehow ended up with Mayers, perhaps at the instigation of Nelson. The playing of Mayers, who switched from piano to organ for this date, is a prominent feature.

Nelson is the arranger and the band includes trumpeter Clark Terry, trombonist Urbie Green, guitarist Barry Galbraith, bassist George Duvivier and drummer Ed Shaughnessy. It is a blast from start to finish on many levels. Every track is either intriguing or a stone-cold winner. The album features a refreshing diversity of tunes, some more challenging than usually included in organ groove records: the pop tune A Taste Of Honey, Latin standard Desafinado, blues tune Goin’ Up North, The Good Life, John Lewis’s The Golden Striker, Thelonious Monk’s Jacky-Ing and the ballads For All We Know and Alone Together.

Nelson squeezes every inch out of the orchestra. The sound is booming and made all the more interesting with robust calls and responses between brass and reed and inspiring off-beat accents. Nelson also makes the orchestra breathe by occasionally dividing leading roles between drums and bass and tuba. In this respect, the high drama of Alone Together, transformed from a ballad into an exotic medium-tempo tour de force, is exemplary of the outstanding talent of Nelson as arranger.

The crunchy organ of Mayers is embroiled in a playful dance with the orchestra, bursting out of it like splatters of lava from a volcano. Mayers limits himself to concise little stories, never cheap, always with meaningful simplicity and overwhelming temperament. He is matched by Ed Shaughnessy, whose precise and absolutely crazy amount of good punches lift the session to a higher level. The tension/release device is especially effective during Nelson/Mayers’s daring take of John Lewis’s The Golden Striker. Monk’s Jacky-Ing gradually builds up tension, via a sterling drum intro, fragmentary backdrops of brass and reed to the statements of Mayers and a lurid shuffle, coming to its conclusion with unadulterated orgasm.

Production – the orchestra sounds a bit far off – may not be top-notch. However, A Taste Of Honey is on par with (in some cases on the winning side of) the high-profile big band records of Jimmy Smith on Verve, which also were arranged mostly by Oliver Nelson. It is reminiscent of the way Ray Charles plays organ and of Brother Ray’s instrumental cuts of Genius + Soul Is Jazz. A feat that completely obviates the need for recommendation.