This is the way you want your jazz: spontaneous, charged and free-flowing. 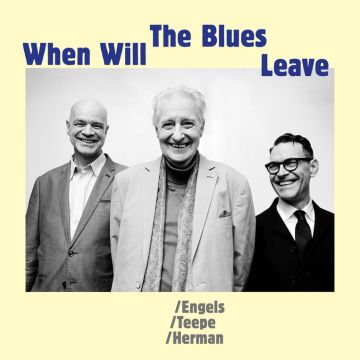 
John Engels is 85-year old and has been playing jazz for sixty years. He ain’t about to stop. On the contrary, the legendary Dutch drummer, who among others cooperated with Dizzy Gillespie, Chet Baker, Clifford Brown, Thad Jones, Teddy Edwards, Ben Webster and Toots Thielemans, swings like mad on When Will The Blues Leave, cooperation with bassist Joris Teepe and alto saxophonist Benjamin Herman. Middle-aged Teepe and Herman have plenty of experience as well. One of Teepe’s career highlights undoubtedly has been his nine year stint with Coltrane’s last drummer Rashied Ali. The multi-dimensional Herman has recently, to give you just one example, released the punk jazz record Bughouse.

When Will The Blues Leave – Ornette Coleman’s anthem that is an apt reflection of this session – finds them in enthusiastic and deeply rooted straightforward jazz mode. The record was recorded, without an audience, at Bimhuis, Amsterdam. Production is wonderful, with drums, bass and sax all sounding resonant and punchy as a unit, which certainly is a prerequisite for a piano-less trio. The set of standards include Sonny Boy, Fried Bananas (Engels also played with Dexter Gordon), Parker’s Moose The Mooche. The inclusion of lesser-known gems as Time Was (best known through the Coltrane version) and Bittersweet (a great tune by Sam Jones, immortalized on the Eastern Rebellion record of Cedar Walton/George Coleman – Engels also played with Coleman) is an extra treat.

While the quality of solo’s, intermezzo’s, group interplay is high throughout, The Peacocks and I Found A New Baby are definite highlights. Herman beautifully rhapsodizes the melody of The Peacocks, the lovely Jimmy Rowles ballad that was a staple for Stan Getz – Engels played with Getz; so by now the loosely interweaved theme of this record will have become evident. The trio is particularly pithy during the New Orleans-flagwaver I Found A New Baby, finding an exceptional synergy of tightness/looseness that stems from long-standing cooperation. Herman refers to the kick-ass version of Lester Young, an example that is hard to beat.

Hard to beat is appropriate terminology also for the real and uncluttered stuff that Engels Teepe Herman present, the kind of jazz that will likely keep it solid till kingdom come.

Find When Will The Blues Leave here.

The Diamond Five showed all the young Dutch aspiring cats, hey, there’s no limit to swingin’ the American Way. 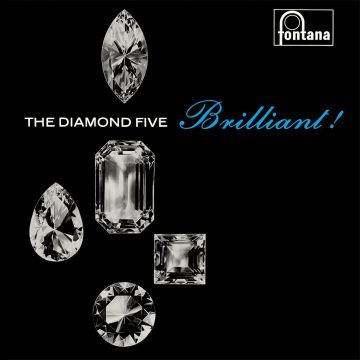 Side A:
Johnny’s Birthday
Ruined Girl
Lutuli
Side B:
Lining Up
Newborn
Monosyl


In the late ‘50s and early ‘60s, European musicians started to get the hang of it as far as hard bop was concerned. The Jazz Couriers of Tubby Hayes and Ronnie Scott raised the bar in the Ol’ Country. Lars Gullin and Ake Persson pushed the Scandinavian envelope. Drummers Daniel Humair from France and Franco Manchezzi from Italy kicked many visiting Americans into action. And The Diamond Five was Holland’s finest, part of developments that deepened the feeling for jazz, which included landmark events like the Concertgebouw concerts of Duke Ellington, Miles Davis, Thelonious Monk, Gerry Mulligan, John Coltrane and Art Blakey & The Jazz Messengers.

The Diamond Five formed in late 1958, when pianist Cees Slinger was asked by the management of Sheherazade (“De Zade”) to form a band. Slinger recruited trumpeter Cees Smal and tenor saxophonist Harry Verbeke from The Diamonds, bassist Dick van de Capelle – who soon suffered an injury that would throw him off the scene for a number of years and was replaced by Jacques Schols in 1959 – and drummer John Engels.

The band enjoyed a great run in Sheherazade, which it co-owned till 1962, for approximately four years. Many visiting Americans shared its stage, among others Stan Getz, Elvin Jones, Don Byas, J.J. Johnson and players from Quincy Jones’s Free & Easy touring band like Benny Bailey, Phil Woods and Jerome Richardson. “De Zade” was the place to be, virtual jazz center of The Netherlands, where like-minded spirits as Piet Noordijk, Nedly Elstak, Rob Pronk, Rob Madna and Cees Kranenburg also made their mark. 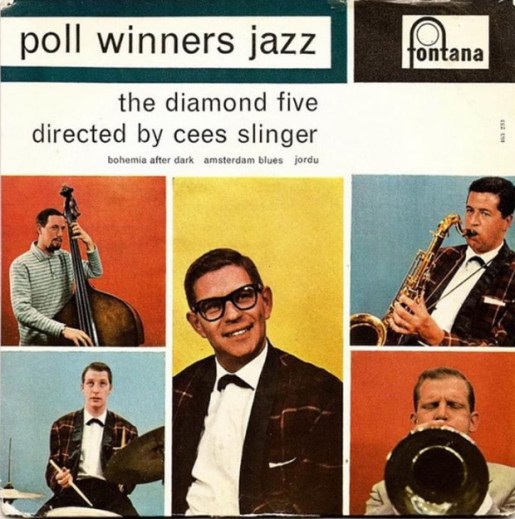 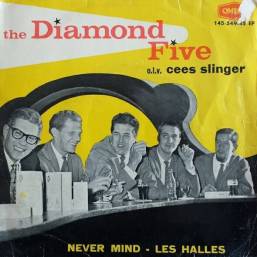 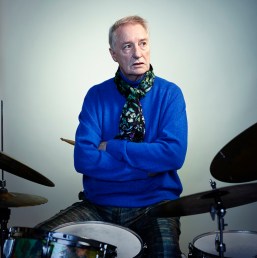 The Diamond Five toured extensively and made a series of EP’s preceding their full-length record Brilliant in 1964, the final year of the band’s existence. (Excluding its comeback period in 1973-75) First of all, isn’t that cover of Brilliant brilliant? Catchy, classy, unconventional, one that stares at you seductively from the bins. And once the needle has settled into the grooves, everyone will most likely have agreed that The Diamond Five was a seductive quintet that put just the right amount of sleaze in a polished set of hard bop. Three cooking tunes by Cees Smal – Johnny’s Birthday, Lining Up and Monosyl – alternate with the intriguing Lutuli and mellow Newborn by the hip arranger Ruud Bos and the ballad Ruined Girl by future avant-garde musician Theo Loevendie.

Smal and Verbeke move smoothly through their book of songs, Smal with vivid lyricism on trumpet, flugelhorn and the most welcome addition of valve trombone on Johnny’s Birthday, Verbeke with generous big tones and extended notes and wails that bring to mind Dexter Gordon. Verbeke is modern yet down to earth and witty in a swing-era kind of way. Like a rotund, frivolous uncle teaching his nephew to shoot pool or catch wild salmon. Slinger thoroughly swings, incited by Schols and Engels, who finally had put his fervent trademark kick starts and fiery and alert backing on a big platter of wax.

Not surprisingly, all members enjoyed fruitful careers. Smal and Schols alternated freelance work with solid engagements for radio and tv. Verbeke was a prime tenorist for many years, Slinger a dedicated modern jazz soloist who accompanied many visiting American legends. Schols was bandmate of Engels on popular recordings by Louis van Dijk and Wim Overgaauw. John Engels is the last man standing. Internationally acclaimed drummer who played with Chet Baker, Teddy Edwards, Stan Getz, Dizzy Gillespie, Sonny Stitt, you name it. Alive and kicking at the age of 85.

Hard to find LP of a legendary Dutch outfit. Great re-issue (as shown) out there.