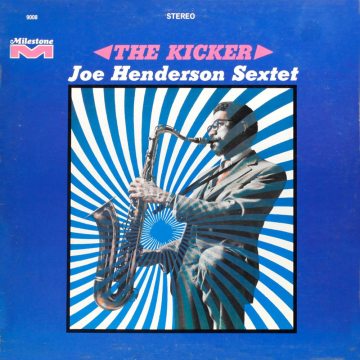 Side A:
Mamacita
The Kicker
Chelsea Bridge
If
Side B:
Nardis
Without A Song
O Amor Em Paz
Mo’ Joe


Henderson must be about the most perfect saxophonist in modern jazz. Exceptional chops, a powerful tone and supurb execution. He’s a tenor sax innovator that has explored the outermost regions of the instrument as well as a great storyteller who keeps constant focus on one of mainstream jazz’ most important axioma, meaningful simplicity. A flexible tenorist that moved just as easily ‘in’ and ‘out’. Henderson might not instill cathartic listening experiences like John Coltrane. Nevertheless, a sensitive and fiery personality rings through Henderson’s strong, probing, eccentric lines, lines that suck one into a thrilling tale, including the added bonus of refreshing wit. One cannot possibly subdue feelings of awe for Henderson’s crafty, passionate game. Keeping blues phrasing to a minimum, Henderson’s lines instead slyly suggest the blues.

Henderson was in the thick of mid-sixties hard bop as well as vanguard jazz, recording acclaimed albums as Mode For Joe, In & Out and Inner Urge. Henderson recorded with Kenny Dorham, Grant Green and Horace Silver and appeared on avant-leaning Blue Note albums, among them Andrew Hill’s Point Of Departure, Pete LaRoca’s Basra and Larry Young’s Unity. One wonders why Henderson, during such a prolific period, traded Blue Note for Milestone. Perhaps Henderson regretted the fact that label boss Alfred Lion retired in 1967. (Lion moved to Mexico, his partner Francis Wolff took over production duties, assisted by pianist Duke Pearson, until his death in 1971) In the guise of Orrin Keepnews, Henderson certainly met a like-minded, equally perceptive label boss.

The septet of The Kicker, including young lions Mike Lawrence and Kenny Barron, cuts loose on three classic Henderson compositions. The Latin tune Mamacita swings hard and Henderson embellishes it with confident legato and dead-pan asides. Henderson initially recorded Mamacita with Kenny Dorham, on the trumpeter’s swan song as a leader in 1964, Trompeta Toccata (read review here). The Kicker and Mo’ Joe, both of which were recorded by Horace Silver while Henderson was part of the hard bop pioneer’s quintet in 1964, are explosive, stunning versions of Henderson’s intricate hard bop anthems.

The apparent ease with which Henderson personalizes standards that were carved in stone for posterity by legendary forebearers, is impressive. Billy Strayhorn’s Chelsea Bridge, which showcased Duke Ellington’s prime tenorist Ben Webster in the forties, gets a vital treatment, tender, endearing yet driving. Saxophonist Benny Green typified Chelsea Bridge as the most ethereal composition in jazz history (in his liner notes for Tommy Flanagan’s 1975’s album Tokyo Recital.) Henderson’s breathy excursion certainly does justice to that eternal charm. Henderson fastens the pace of Without A Song, which was performed beautifully, for instance, by Sonny Rollins on the tenorist’s eponymous The Bridge in 1961. Louis Hayes’ and Ron Carter’s free-flowing accompaniment is a big part of the take’s artistic succes. Speaking about Hayes, Louis Hayes’ swift, furious drumming lifts the whole proceedings to an entirely different level. He’s outrageous!

Henderson also wrote the idiosyncratic blues If, taking it at a fast pace, starting with staccato notes, then exploring the low and high register, sprinkling his ‘out’ phrases with a myriad of slurs, while remaining continuous flow and swing. Riveting stuff.