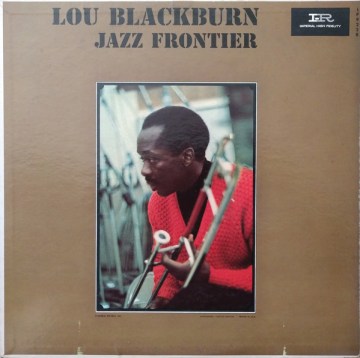 Side A:
New Frontier
Perception
I Cover The Waterfront
17 Richmond Park
Harlem Bossa Nova
Side B:
Luze Blues
The Clan
Scorpio
Jazz-A-Nova
Stella By Starlight


Contrary to myth, West Coast does not solely consist of polished and cool jazz. Besides, though all participants in Jazz Frontier resided in Los Angeles in the ‘60s, Lou Blackburn was born in Rankin, Pennsylvania, Freddie Hill in Jacksonville, Florida and Horace Tapscott in Houston, Texas, though the latter was raised in the City of Angels. Birthplace of John Duke and Leroy Henderson unknown. Duke played in the Basie band (I love the sound of this) in the ‘70’s. Henderson enjoyed a stint with organist Richard “Groove” Holmes in 1961-62.

Who knows along which route the journey of their ancestors went from the starting point of Africa? (Blackburn’s preoccupation with his roots shows through his fusion of blues and African music of his band Mombasa in the ‘70s) One of the main routes started on the mainland on the East Coast, from where pioneers went to cross the Appalachian mountain region, into the heart of the country, Westbound to the sunny shores of the Pacific, while, to paraphrase Jim Morrison, Indians were scattered on dawn’s dusty road, bleeding.

Blackburn & Hill. Sounds like a real estate firm on Madison Avenue but in reality it’s a configuration of outstanding jazz cats that found themselves scattered on the star-paved streets of Hollywood. A tight-knit pair that cooperated regularly as session men for radio, tv and the movies and ran into each other in the big bands of Gerald Wilson, Onzy Matthews and Oliver Nelson, who recruited them for dates by Carmen McRae, The Three Sounds and Thelonious Monk. (Monk’s Blues) A highpoint in Blackburn’s career: Mingus At Monterey.

Opportunities to record the real stuff were few and far between but Blackburn temporarily found solace at the headquarters of Imperial Records, the rhythm and blues-label that had rarely released jazz other than a few (excellent) records by Sonny Criss. Two releases constituted the limit for Blackburn: Jazz Frontier and Two Note Samba. Similar line up. Easily on par with productions on the independent labels on the East Coast but, not surprisingly considering Imperial’s core business, not particularly selling in high quantities.

Belated kudos to Michael Cuscuna, vault scavenger sui generis, who saved these records from obscurity by compiling and annotating them for the ultimate East Coast label, Blue Note, on the two-fer CD The Complete Imperial Sessions in 2006. Yep, that’s the deal the Flophouse Floor Manager remembers having once made in a little charming store in the big city of Barcelona. No vinyl but freedom of travel no less. And the joy of offline shopping-no-shipping, rabbits in the record store hat, chit-chat with knowledgeable Record Store Manager, late afternoon glasses of Cava, bites of mushroom croquettes, manchego and olive skewers, garlic shrimp and churro chips. Remember when.

Hip and varied Blackburn tunes like the Horace Silver-ish New Frontier and Perception alternate with the sprightly bossa Harlem Bossa Nova. The band swings Curtis Fuller’s The Clan into the ground and Blackburn plays an affectionate I Cover The Waterfront. Blackburn & Co. cover all bases. The fluent and tart Blackburn, buoyant Hill and remarkably spicy on-top drummer Leroy Henderson guarantee a well-above average affair. Then there’s Horace Tapscott, future cult hero of The Giant Is Awakened album and his Pan African Peoples Arkestra, whose angular rhythmic surprises, including a daring tinge of cocktail lounge, pulls it up a notch.

Both Blackburn and Hill bid farewell to Los Angeles in 1971. Blackburn passed away in Berlin in 1990. Hill allegedly wandered in desert towns until his demise at the tail end of the ‘70s. Tapscott died in 1999.