Just when you think how in the hell are the guys from Bruut! going to keep it fresh after all these years, they turn in V. Their fifth album, and their grittiest. 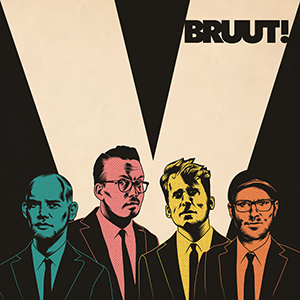 on June 1-3, 2018 at Moon Music Studio, Maasbracht, The Netherlands


These guys may not look like a couple of greasy workers diggin’ potatoes. Instead, they are some of the sharpest dressers on the scene. But if not dirty on first sight, saxophonist Maarten Hogenhuis, organist Folkert Oosterbeek, bassist Thomas Rolff and drummer Felix Schlarmann got soul of a strangely twisted kind. In their universe, marriages are celebrated between boogaloo and power pop, post-punk and mood music, perhaps even Link Wray and P.J. Harvey. If a pop band would try its hand on this kind of crossover music, it would most likely be unconvincing. But Bruut! consists of accomplished jazz musicians and each member adds his particular talent and vibe to the palette of entertaining NU-soul jazz.

The wedding party likely takes place in one of those seedy East Hollywood strip clubs frequented by a dozen or so Tom Waits impersonators and the lady that makes a rather charming impression despite the blue bags under her eyes, Botox breasts and stale perfume dating back to the era during which E.T. was in the pre-production phase. Or it might be held at one of the trashy jetset places one always reads about in the tabloids and is never able to attend.

Whatever spot it might be, the fat, resonant bottom of drums and double bass is perfect foil for Hogenhuis and Oosterbeek. The alto and tenor sax of Hogenhuis sounds raw, like a distorted Varitone sax, and Hogenhuis regularly hams it up like a disgruntled hooligan on ketamine. His timing is immaculate and he allows himself a number of solo spots and ad-libs that demonstrate an apparent admiration for Eddie Harris. Oosterbeek provides crunch and edge with all kinds of keyboards like the Hammond, Korg, Vox, even Harmonium. Angular hooks that are groovy and jazzy but also part Queens Of The Stone Age part Pogues part B52’s are enlivened with frivolous bridges and underscored by varying, hefty beats from Schlarmann. As a breather, Hogenhuis contributes his customary mood pieces that showcase his liquid silver tone and melodious lines.

As usual, Bruut!’s song titles consist of only one word. Lopez. Bud. Maestro. Klets. Peewee. Part of the group’s identity that is crystal clear and hasn’t worn.

Find the album here.
And check out their new single Lopez here

Thanks Lou. Thanks Quinten. Thanks Dick. For six years now, Holland’s hippest crossover jazz group Bruut! has made grateful use of differing styles of music, creating a hodgepodge that the foursome dubbed ‘superjazz’ almost from the word go. A likely title for its fourth album, a rockin’ blend of surf music, funky jazz and jolly swing, underscored by the alluring alto sax of Maarten Hogenhuis. 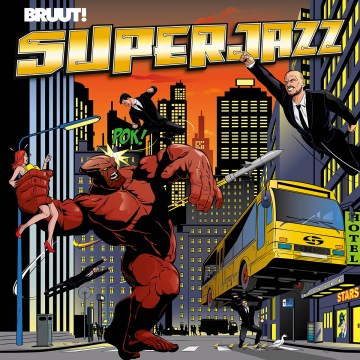 in 2016 at Moon Music, Roermond, The Netherlands


Maarten Hogenhuis, organist Folkert Oosterbeek, bassist Thomas Rolff and drummer Felix Schlarmann bring their brand of postmodern popcorn grooves and hi-octane soul jazz with a sense of joyful interaction not unlike like-minded outfits as Flat Earth Society and Medeski, Martin & Wood. I’ve always felt there just might be that young newcomer to jazz having a revelation after hearing Bruut! perform an homage to the boogaloo period of saxophonist Lou Donaldson. Wishful thinking? I don’t think so.

Sparse boogaloo traits on Superjazz, strictly speaking, but Papa Lou’s spirit is certainly hovering over the exotic Camel. And the increasingly hot groove on Plume, which starts as the sound of a shellac disc of Cab Calloway, Wild Bill Davis or Bill Doggett that one might find in an East-Texan thrift store, develops into a cut many will recognize from the late sixties funk jazz output on Prestige and Blue Note by the likes of Rusty Bryant and Boogaloo Joe Jones. There’s Yamazaki, a fast-paced cartoonesque bopswing tune right out of the Raymond Scott bag. The old-timey Sonora swings merrily in 4/4 time.

The soundtracks of Quinten Tarantino have always been a big inspiration for Bruut!. Maybe one day the director might consider including Saga in one of his flicks, a sleazy grunge affair that reveals a lot of ‘rage against the machine’… Organist Folkert Oosterbeek conjures up his meanest Hammond sound available. Throughout the album, the playful Oosterbeek alternates between textures that range from shades of the Farfisa organ, old-fashioned, accordion-type chords to the crunchy sound and crisp lines of the organ modernists from the sixties. Above all, the sing-songy, slightly husky alto sax of Hogenhuis earmark the straightforward, Dick Dale-influenced surf tunes Baha and the punky, jumpin’ and jivin’ Prince as quite out of the ordinary. Occasional twists, turns and flurries of notes reveal the work ethic of a jazz cat that grew up with Parker and the Parker-influenced giants of jazz. The poppy ballad Loulou finds Hoogenhuis, like a daddy soothing a daughter with a fractured knee, reaching for a soft spot in the heart.

Bruut! appeals to the hearts and minds of jazz and popular music fans that appreciate tongue-in-cheek, uplifting tunes performed with deftness and unbridled enthusiasm.