Dutch mainstreamers turned out to be top-notch fusion funkateers. 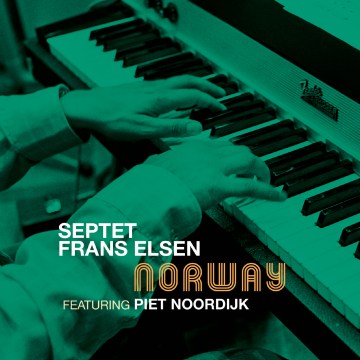 
At one time during the course of Norway, a session by the Septet Frans Elsen that was retrieved from the vaults by the Dutch Jazz Archive, these Dutch mainstays seem to have found themselves in a zone. It’s during their live rendition of the glowing Skåbu that a dark, brooding intensity reaches boiling point, the moody figures of Fender Rhodes player Frans Elsen leading the way and soloists Piet Noordijk, Eddie Engels and Wim Overgaauw having their sparkling say. Noordijk incorporates his fiery and lean bop lines into the fusion package, Engels plays expressive space blues and Overgaauw finds the intriguing middle ground between Sonny Sharrock and Phil Upchurch. Boiling point is partly reached by drummer Eric Ineke’s progressively intense and accentuated groove.

Frans Elsen was on the scene since the mid-1950’s, a splendid and authoritative bebop pianist but under the radar internationally. Elsen, who had amazing knowledge of jazz piano history, was one of the founders of Dutch jazz education and, feared but loved and influential on next generations, taught at varying conservatories. In the early 1970’s, Elsen was inspired by the Mwandishi band of Herbie Hancock and purchased a Fender Rhodes keyboard. His jazz funk and fusion septet was in existence till the early 1980’s.

Elsen had traveled to Norway and inspired by the surroundings written tunes which titles signified little villages in the region. By no means fluffy or floaty, his conveyance of mysterious and bucolic landscapes is grounded in strong melodies and terse rhythms. The attention of grooves like Harpefoss, Skåbu and Ringebu is held by Noordijk, who is like a bear cat, leaping this and that way and emitting the occasional screech and roar and Engels, whose fluency between registers and fire in semi-modal-funk surroundings is remarkable. AH-Mooh is Latin Nordic jazz funk, a lively contradiction in terms that is resolved excellently by the flute work of Ferdinand Povel. Throughout, Elsen proves to be a balanced Fender Rhodes player, contributing supple lines, staccato figures and decorative chords. Quite surprising, although Noordijk and bassist Rob Langereis had been part of burgeoning improv maverick Misha Mengelberg’s group and young Ineke had experienced jazz rock surroundings, how these mainstream stalwarts adapt so effortlessly to contemporary surroundings.

As a rule, the typically studious Dutch Jazz Archive produced a classy package (including liner notes by Eric Ineke) and Norway sounds clear and fresh thus should attract contemporary audiences, not least with the live recordings that climax with Otta, an Ornette Coleman-ish romp that has all soloists having serious fun and Engels kick starting his solo with a braggadocious entrance. Later on in his career, when Elsen had intensified his return to bebop piano, he referred to Norway as a youthful indiscretion. Safely said, a solid fusion imprudence.

Find Norway on the website of Nederlands Jazz Archief here.

Check out this performance at Loosdrecht in 1972 on YouTube here.