Crowd-pleasing is not a dirty word. 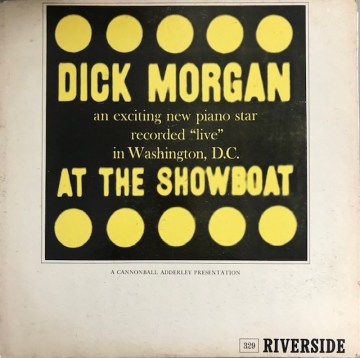 Side A:
For Pete’s Sake
I Ain’t Got Nobody
Misty
The Gypsy In My Soul
Side B:
Will You Still Be Mine
Big Fat Mama
Like Lois
It’s All Right With Me


To the list of Lee Morgan and Frank Morgan – no relation – we now add Dick Morgan. Not as iconic as the trumpeter from Philadelphia, who was fatally shot by his common-law wife Helen, nor as hardboiled as alto saxophonist Frank Morgan, who spent approximately thirty years in jail in the “middle” part of his career and made a minor comeback in the late ‘80s, the unknown pianist Dick Morgan nonetheless put in his five cents of jazz lore. Morgan, born in Petersburg, Virginia and a mainstay in Washington D.C. until his death in 2013, recorded approximately a dozen albums, among which three records for Orrin Keepnews’s Riverside label.

The lore’s starting point is 1960, when alto star and officious A&R executive Cannonball Adderley saw a performance of the Dick Morgan Trio in D.C. and duly impressed called Keepnews and requested that Riverside record the promising pianist. The result was At The Showboat, the second album in the “A Cannonball Adderley Presentation” series, following James Clay/David “Fathead” Newman’s The Sound Of The Wide Open Spaces. Tough nut to crack that space, but Morgan gave it a good shot.

The liner notes mention the influence of Oscar Peterson. Understandably, since Morgan plays “much” (well, “very much”) piano, combining blues phrasing, striking tremolos and heated turnarounds and cadenzas all over the keys with hard, increasingly intense swing. Yet, the comparison is a little too far-fetched. Not as virtuosic and not as perfect and clean, Morgan instead has a more raw and funky edge. The feeling of Les McCann, some of the skills of Red Garland. Suits me to a T.

To be sure, “Star” is way too far-fetched, but “Exciting” definitely is a fitting description. If you can’t hold the attention of the audience, why bother, and Morgan is a pure-bred performer. Enthusiastic grunts accompany the lines of his blues, blues-based, standard and ballad tunes For Pete’s Sake, Big Fat Mama (credited to Morgan “by fault”), I Ain’t Got Nobody, The Gypsy In My Soul, Misty, It’s Alright With Me and Like Lois. Mid-to up tempo is the natural pace for Morgan and his trio, a unity of hard swing and effective rhythm and blues-devices yet subtly dynamic in Misty and ballad mode.

The Gypsy In My Soul, written by Moe Jaffe and Clay Boland for Penn University’s Wig Show in 1937 and an evergreen since, is exemplary of Morgan’s style. He’s like an inexhaustible Yorkshire Terrier running after the ball, a faultless jazz player but not one for genteel recitations. Crowd-pleaser but never bland. Down to earth and flexible. In short, a welcome addition to the Morgan jazz family.