Lem Winchester’s career was cut short by tragedy but his concise discography showed plenty of promise. Lem’s Beat is one of his finest efforts, not least because of the presence of Oliver Nelson. 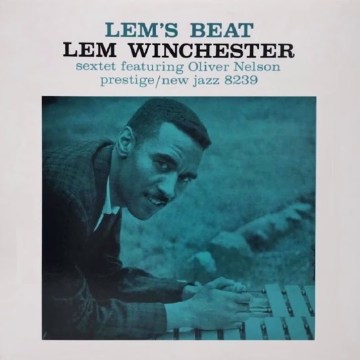 
Aswinging vibraphonist in the tradition of Milt Jackson, Lem Winchester started playing professionally in the late 50’s after giving up his job as police officer in Wilmington, Delaware. The sleeve of his debut recording New Faces At Newport on Metro Jazz, split with pianist Randy Weston, showed Winchester wearing his police officer hat. Poor Lem. It’s a pity no one came up with the idea of coupling him with tenor saxophonist Buck “The Wailing Postman” Hill from Washington D.C.

On a musical level, the results of a partnership of these rather obscure but outstanding players would have been a boon. As a matter of fact, the short career of Winchester is marked by interesting and fruitful cooperations. Argo placed the Ramsey Lewis Trio by his side. On Prestige and its subsidiary label New Jazz, Winchester recorded with Benny Golson and Hank Jones as a leader and organists Brother Jack McDuff, Johnny “Hammond” Smith and Shirley Scott as a sideman.

As well as Oliver Nelson. In 1960, Winchester played on Nelson’s Taking Care Of Business (New Jazz) and Nocturne. (Moodsville, Prestige’s other subsidiary label) Likely, after the March session of Takin’ Care Of Business, Nelson returned the favor, appearing on the April session of Lem’s Beat. Another session in the pocket, another bill paid.

Typical and excellent quintet stuff from the early 60’s, Lem’s Beat has Oliver Nelson as arranger and on tenor saxophone, an underrated player and confident individual who crafts stucturally sound solo’s, rich with varied blues motives and a strong hard sound from the Dexter Gordon school. It has Curtis Peagler on alto saxophone – Who??? Anyone? – boppish and bouncy and occasionally phrasing against the grain; solid and fluent Wendell Marshall on bass, Art Taylor on drums and alternating pianists Billy Brown and Roy Johnson. Again, who, anyone?

And the leader, Lem Winchester, taking the vibraphone, curious mixture of melody and percussion, by the horns, swinging with effortless grace and wit, not much that will rattle the bones of dead Downbeat critics but entertaining and stylish. Lem’s beat was solid and whether he was beat (the hipster slang of the jazz-loving Beat Writers – “Man, I’m beat” was a way of saying one was down and out, which was uttered by middle-class boys turned greasy hipsters from Frisco to New York but was uttered initially by Herbert Huncke in the mid-40’s, the über-Beat that likely picked it up in Afro-American quarters and, by the way, was a big fan of Charlie Parker), who knows. Lem’s Beat is a funny title, but the title of the sole composition by Winchester, Lem & Aide, is even better.

Nelson was an outstanding arranger whose ensembles for small groups gave the impression of a bigger band than was the case and he does the trick on Lem’s Beat’s blues-based repertoire. Two tunes stand out: the seldom-played Tionkin/Webster composition Friendly Persuasion gets a MJQ-ish treatment. Lady Day is a sensitive homage to Billie Holiday by pianist Roy Johnson.

The tragedy of Lem Winchester’s life, former cop, was that he died from a hand gun accident, allegedly during a game of Russian Roulette. He passed away in 1961 at the age of thirty-three.