This Is Walt Dickerson signaled the arrival of a new and original voice on the vibraphone. 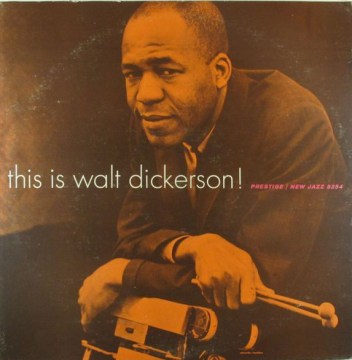 Side A:
Time
Elizabeth
The Cry
Side B:
Death And Taxes
Evelyn
Infinite You


The New Jazz label merits plenty of attention. The starting point for Bob Weinstock’s recording endeavors in 1949, Weinstock dropped the name in favor of Prestige in 1951, only to reinvent the name as the imprint for a hodgepodge of records in the late 50s and early 60s ranging from Johnny “Hammond” Smith to John Coltrane. The bulk consisted of avant-leaning sessions and served somewhat as the mirror image of Blue Note’s cutting-edge department, which offered challenging records by Herbie Hancock, Jackie McLean and Bobby Hutcherson. New Jazz is lesser known to the general audience but equally exciting. After all these years, the energy of New Jazz albums by Steve Lacy, Yusef Lateef, Jaki Byard, Roy Haynes, Mal Waldron, Eric Dolphy and Oliver Nelson is still palpable. All of these records, both Blue Note and New Jazz, were engineered by Rudy van Gelder. Busy bee, Rudy. Seven days a week. Didn’t go on vacation, mostly stayed inside. Turned more pale by the minute. Sun shone not on his face but in the grooves of the great jazz men’s waxed offerings.

Dickerson is of the post-bop variety, concerned with the expansion of the vocabulary of the vibraphone, an expressive player that prefers the broad range of the modal sound palette. Dickerson’s four albums on New Jazz, recorded in 1961 and ’62, present the kind of seductive, tentative hybrids of mainstream and avant-garde that are just close enough to the tradition and not really too far out for me to enjoy. I feel that it’s the tension between tradition and experiment that gives records like Dickerson’s on New Jazz their particular charm.

The attraction of This Is Walt Dickerson’s set, my favorite of his foursome of New Jazz records that was concluded with Relativity, A Sense Of Direction and To My Queen, lies in the particular handling of a minimum of motives, which are played out, considering Dickerson’s abundant double-timing, remarkably unhurriedly. It’s a transient experience, soothing, hypnotic. Dickerson and his companion on the piano, Austin Crow, feel their way in a landscape without the customary chord changes and reach for a like-minded path through the dusk, their thoughts fanning out to the far reaches of the keyboard. Passionately, but not overtly dramatic, they express their emotions in no uncertain terms. This is stuff that goes from the gut to the heart. The base, consisting of bassist Bob Lewis and drummer Andrew Cyrille, future avant heavy, is solid and responsive. Young Cyrille’s accents and loose but solid feel perfectly bring out the qualities of Dickerson’s charged style.

No inconsiderate words should be said about a record that includes a crackerjack title like Death And Taxes. Pretty mean tune, too, with a quirky waltz feel and a couple of motives played out to full effect. The Cry, on the other hand, is a one-chord mambo romp, Time a sly medium-tempo take on the blues, Infinite You a relentless modal swinger. The tempo of Dickerson’s ballads, Elizabeth and Evelyn, is unusually slow, and is contrasted with torrents of sizzling and boiling notes by Dickerson, which never sound superfluous. I’m sure that Elizabeth and Evelyn, whoever they may have been, were touched considerably by Dickerson, who is singing his heart out below the balcony.

After the more avant Plays Unity on Audio Fidelity and an album with Sun Ra, Dickerson took a 10-year sabbatical in the mid-sixties and recorded mostly for Steeplechase in the late 70s. Dickerson passed away in 2008.