Early in her career, organist Rhoda Scott brought down the house with unvarnished, r&b-drenched soul jazz. 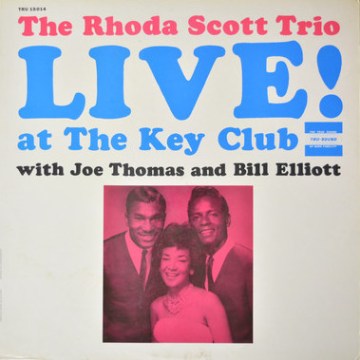 
Just as a soccer team needs a skilled ball breaker on the mid-field to let the star player shine, the jazz artist needs a producer that pulls the right strings. Ozzie Cadena was for Rhoda Scott what Johan Neeskens was to Johan Cruijff. Cadena, best known through his work for Prestige Records, presented Rhoda Scott with the idea of recording a live session at the Key Club in Newark, New Jersey. It was released on Cadena’s Tru-Sound label in 1963.

I love these slices of lively musical history that show you what soul jazz was really about during its heyday in the sixties. It was uplifting music at the intersection of jazz, rhythm-and-blues and soul, presented in tiny clubs or hotel bars and frequented by Afro-Americans. The crowd had a natural ball and appreciated good, meaningful music. Hip to the tip, so I’ve heard many survivors say, it might express equal admiration for Cannonball Adderley and Floyd Dixon, Jimmy Smith and Smokey Robinson. The artist was both star and, having a similar background, part of the pack. I’m not saying contemporary performers and crowds aren’t mutually responsive! But back then the cohesiveness of the black musical culture of the so-called chitlin’ circuit definitely was a peculiar, striking and intense phenomenon.

Rhoda Scott has all the makings of a high-class and soulful artist with a keen sense of the tastes of the audience. She grew up in Dorothy, New Jersey, the daughter of a minister and was naturally drawn to the church organ. Well-versed in the modern jazz style in the slipstream of Jimmy Smith, Scott got her first break in 1963 in New York with the support of Count Basie. She recorded two albums for Cadena’s Tru-Sound, Hey Hey Hey! in 1962 and Live At The Key Club in 1963 and extensively toured the chitlin’ circuit of the East and Midwest.

Scott eventually had other plans and settled in Paris, France in 1968. She had went to study with Nadia Boulanger in 1967 and upon a later return fell in love with actor/singer Raoul Saint-Yves, her future husband and producer until his passing in 2011. Her migration is undoubtedly the main reason that she is not as well known in the United States as many of her colleagues that recorded for Blue Note and Prestige. But it presented Scott with a new, responsive audience in Europe and a record label, Barclay, that gave the organist carte blanche. Scott’s approach of using the full sound spectrum of the Hammond organ was evident on her first album in France, Take A Ladder. Scott recorded prolifically for Barclay and Verve, among others. Plus The Thad Jones/Mel Lewis Orchestra (’76), Plus Kenny Clarke (’77), Negro Spirituals (’83) and From C To Shining C (’06, featuring tenor saxophonists Red Holloway and Plas Johnson, released on ‘organ professor’ Pete Fallico’s Doodlin’ label) are a couple of my favorite Rhoda Scott albums.

Scott’s style is a natural mix of modernism, gospel and blues. Throughout her career she has displayed an unwavering thirst for variation in sound, which by her own account “is not so much the result of different settings but the way I voice.” She will swing you into the ground Jimmy Smith-style but also conjures up sounds that work well as accompaniment to romantic walks along the Seine. Romance is not the first word that comes to mind when listening to the groovy and greasy Live At The Key Club, but Scott’s curiosity of the Hammond organ’s potential is already apparent.

The response of the crowd at the Key Club in Newark, New Jersey, bonafide soul jazz town, is frenzied, it most certainly is a rowdy bunch. Scott’s trio featuring tenor saxophonist/flutist Joe Thomas and drummer Bill Elliott presented a fun set. Scott’s r&b tunes Hey Hey Hey! and the gloriously raucous I-Yi-Yi-Yi please the audience much in the same way as Dee Dee Sharpe, Bob & Earl or James & Bobby Purify did. The trio sings as well and may not possess classic soul voices but its fire and enthusiasm is contagious. Elliott sings fair covers of Nat Adderley’s The Work Song and Mongo Santamaria’s Watermelon Man. Sha-Bazz is the set’s hefty, exotic groove, Danny Boy a lovely ballad and Lionel Hampton’s Midnight Sun – Jimmy Smith’s first single for Blue Note when the pioneer of modern jazz organ burst on the scene in 1956 – a sensitive moment of nostalgia. Throughout, Scott’s command of the organ is admirable, every sound, from thin, harsh to reverberating and orchestral, a means to build a meaningful and exciting little story.

Rhoda Scott is 81 years old. She still lives in France and has recently finished her thesis on the life and career of fellow expatriate, Lou Bennett. Her latest album, Movin’ Blues was released last January. See teaser (in French) here.