Griff & Lock rock The Penthouse in Seattle on Ow!, a killer Record Story Day release by Cellar/Reel To Real. 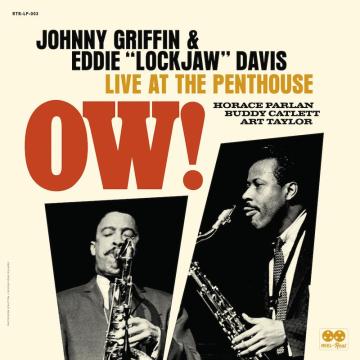 on May 14 & June 6 at The Penthouse Jazz Club, Seattle

LP1
Side A:
Blues Up & Down
Ow!
Side B:
Bahia
Blue Lou
LP2
Side A:
Second Balcony Jump
How Am I To Know
Side B:
Sophisticated Lady
Tickle Toe


Nothing like a solid tenor battle. Starting out as a competitive ‘cutting contest’ in the swing era – the most famous being the alleged Kansas City battle in 1933 when Lester Young ‘cut’ Coleman Hawkins and thereby planted the seeds of the modern style – in the ensuing years the battle developed into a more mutually responsive festivity. Dexter Gordon/Wardell Gray set the standard. Prime examples of the 50s and 60s are Gene Ammons/Sonny Stitt and Al Cohn/Zoot Sims. A couple of epic recordings that come to mind are Sonny Rollins/Coleman Hawkins (Sonny Meets Hawk) and Clifford Jordan/John Gilmore (Blowing In From Chicago). To name but a few remarkable duo’s and records.

Arguably the most unique team is Johnny Griffin and Eddie “Lockjaw” Davis. It definitely was the most prolific duo. During their stint from 1960 to 1962, the duo recorded ten records on Jazzland/Riverside and Prestige, among them four live records of their Minton’s Playhouse performance and a superb, hard-driving record of Monk compositions – Lookin’ At Monk. The career of Eddie “Lockjaw” Davis went as far back as Louis Armstrong. He was a mainstay of the Count Basie band and, not that well-known, led the house band at Minton’s from 1946 to 1952. “Jaws” was the kind of soul tenor that also veered from honking r&b in the 50s to a successful organ combo stint with Shirley Scott in the late 50s. His work with Griffin solidified his reputation as a bonafide jazz player.

Griffin, fastest tenor bop gun in the West, came into his own in the late-50s on Blue Note and Riverside and established himself as a major force on the scene with his cooperations with Art Blakey’s Jazz Messengers and Thelonious Monk in 1957/58. Fire meets fire. Griff is a hard-boiled egg flavored with chili pepper, Lock meat and potatoes, they burned the bop and swung till they dropped.

Up until 1962, the band further consisted of pianist Junior Mance, bassist Larry Gales and drummer Ben Riley. At the time of their Tough Tenor Favorites LP, pianist Horace Parlan and bassist Buddy Catlett had replaced Mance and Gales. Both Parlan and Catlett were present at the Penthouse gig. Art Taylor presumably subbed for Ben Riley. The band plays three tunes from the Tough Tenor Favorites album: Dizzy Gillespie’s Ow!, Ary Barrow’s exotic Bahia and the warhorse Blue Lou, which the quintet takes at blistering tempo.

Lester Young’s Tickle Toe, from the Basie band book, is a furious potboiler, while Sophisticated Lady, a feature for baritone saxophonist Harry Carney in the Ellington Orchestra, is the canvas for Griffin’s meaty lyricism and double-time strokes. Classic riffs like Second Balcony Jump alternate with the blues of Blues Up And Down, both of which are right up the alley of Art Taylor, who locks tight particularly well with Griffin. They’re hot, as if they are furiously devouring a birthday cake, or dancing a passionate paso doble.

Griff & Lock, two sides of the tenor coin, two distinct stylists. “Jaws”, scrabous and witty, slurring, barking, honking, works the magic, his bag of tricks an incorporation in a style that is simultaneously earthy and more complex than generally assumed at first hearing. The almost otherworldly quality of his playing – he often begins phrases where other might end them, and vice versa – lies at the heart of his sax poetry. The way that Griffin shoots from the hip on Tickle Toe is typical of “The Little Giant”. Griffin’s torrents of notes on fast burners, every one of the notes a sure shot, have always been somethin’ else. His storytelling on this gig, a well-paced development from breeze, gusty wind to rousing tornado, is striking.

Kudos to Cory Weeds, saxophonist and label owner of Cellar, and his companion on this job, Zev Feldman from Resonance Records. The superb re-mastering, lush packaging and thorough essays make Ow! one of the finest of RSD releases from the tail end of 2019. The Reel To Real subsidiary of Cellar also was responsible for 2018’s historical recordings of Cannonball Adderley’s Swinging In Seattle (also a Penthouse performance) and Etta Jones’s A Soulful Sunday: Live At The Left Bank.

Check out Cellar for contemporary recordings by the likes of Jeb Patton, Joe Magnarelli, Cory Weeds and a special section Hammond B3 organ combo music including Ben Patterson here.

Find Ow! Live At The Penthouse and samples here.