As if you’re there. That’s the plain and simple first, but very important thing, that comes to mind when listening to Randy Weston’s live album from 1956, Jazz A La Bohemia. 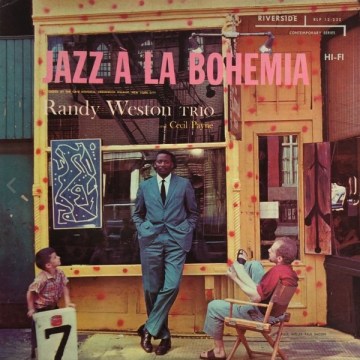 
Names with a pleasant and catchy ring seep through the rubble and kibble of contemporary society, wastebasket of incontinent billionaires, hemorrhaging parliaments, promoting slices of life that fail to imitate even the best of the bad movies. Names like… “Bohemia”. You know what I’m talking about, Club Bohemia. One of the places that housed icons almost 24/7, that voiced eloquent and fiery statements of protest through the curled shreds of smoke, not by any forced attempt but by plainly being themselves, individually and as a group, still as a subculture and perhaps almost a sect, a gathering of astute Bohemians… non-conformists… by being masters of a unique American art form that the establishment would rather ignore but which by sheer force of beauty proved impossible to subdue. Club Bohemia, you know… where Cannonball Adderley burst on the scene in 1955, where one of Art Blakey & The Jazz Messengers’ declarations of independence was recorded.

And Bohemia as in: Randy Weston’s Jazz A La Bohemia, recorded on October 14, 1956 in Greenwich Village, NYC. Weston himself was, and particularly would be as time progressed, a voice to be reckoned with. Instilled with a sense of the African heritage of American black people by his father at a young age, Weston thrust himself into African rhythm as early as 1960, releasing the eponymous Uhuru Africa and kept exploring this well for the rest of his life, to much acclaim.

In 1956, Randy Weston was a slightly Monkish pianist from Brooklyn, NYC, neighborhood that spawned Max Roach and Cecil Payne, among many others. By his own account, Weston would add that slightly Monkish, of course, means African by descent as well, notwithstanding the mingling with European harmony and such. By all means, Weston definitely was Monkish. Except for the hat wear and the height – Weston must be the tallest jazz man in jazz history, close to Scotty Pippen, and would’ve made a great match with Jack Teagarden, who was about the height of Larry Bird – Weston’s subversive timing, dissonant inklings and percussive attack is reminiscent of The High Priest.

Weston was part of the Riverside Records roster from April 27, 1954. Thelonious Monk signed a contract with Riverside in 1955, Plays Duke Ellington being the pianist’s first session in July 21. By then, Weston had recorded four records for Orrin Keepnews/Bill Grauer’s label. Perhaps, considering his indebtedness to Monk, Weston decided it would be best to seek new vistas. Anyway, Weston and Riverside went their separate ways and the pianist freelanced his way to the tail end of the decade on Dawn, Jubilee, United Artists, Roulette and Atlantic.

Club Bohemia… Weston and his men: Cecil Payne on baritone, Ahmed Abdul-Malik (born Jonathan Tim, Jr.) and Al Dreares on drums. You’re there. It’s a warm valley… a blanket thrust upon your shoulders when you have entered the perimeter soaking wet from the rain… Much of the album’s charming immediacy is, I think, on account of the mix of Payne’s sonorous baritone, Malik’s pumping, resonant bass and Weston’s focus on mid-register tones. Payne barks but is sing-song-y by nature as well. He has a lot of breathing room with the absence of trumpet or fellow sax. All by himself, at ease like a guy who pumps gas for a living and has a day off, working on the carburetor of his ’56 Packard…

Weston is a master of suspense. The mid-tempo groove Just A Riff, a simple but original riff by Weston, finds him in a playful mood. Weston’s strength lies in his ability to compose while playing, a coherent mingling and stacking of motives. He alternates between staccato fireworks and lingering romantic notes during his exercise of the wonderful ballad You Go To My Head, a pretty naughty affair. Hold ‘M Joe is pure Latin/Mex – sophisticated – party fare. Chessman’s Delight is another one of Weston’s delicious riffs with a hot, boppish bridge and simultaneous old-timey feel straight from Teddy Wilson’s era, complete with Weston’s deceptively simple shenanigans from one side to the keyboard to the other in split seconds.

It’s up there with Wes Montgomery’s Full House – also on Riverside – as one of those live albums full of great atmosphere and musicians that are clearly reveling in each other’s company, much to our delight.