Things do not always happen as they should. To be sure, they rarely if ever do! However, pianist Junior Mance, one of the greatest blues pianists in jazz, was destined to record an album of blues tunes. That album was Junior’s Blues, released by Riverside in 1962. 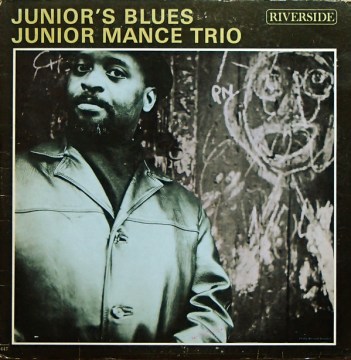 Side A:
Down The Line
Creole Love Call
Rainy Morning Blues
Yancey Special
Gravy Waltz
Side B:
Cracklin’
In The Evening
Blue Monk
The Jumpin’ Blues


As a blues man among modern jazz pianists, Mance is perhaps equaled only by Gene Harris and Ray Bryant. Les McCann is a favorite of personal assistants, runners and restroom ladies of Flophouse Corp. and, last but not least, yours truly, head honcho of the Flophouse Magazine headquarters, which some of you may consider plainly an attic, but for me is nothing short of the main boardroom, resplendent with everything the modern-day (or old-fashioned, depending upon your view) chief editor needs. Because it really is not plain. There’s a lovely wooden desk. A side table that carries glasses and a bottle of 12 year-old Red Breast pot still whiskey from Ireland. A weathered Chesterfield chair for comfortable listening purposes. And records of course, the weight of which threatens to destroy the town house’s construction, much to the dismay of two of its main occupants, my wife and kid daughter, undeniably the most kindred and faithful souls I have had the pleasure to encounter in this earthly existence. Three if you count the cat. Wife and child can’t help it and aren’t into jazz. Cat couldn’t care less. She’s a country girl. Mice and kibble is her main concern, notes and tones are phenomena from another dimension.

It goes without saying, we’re not running a blues competition. McCann’s earthy, driving style, Gene Harris’ subtle variations on a theme, Ray Bryant’s striking incorporation of the tradition are all contagious. I’m sure there are a number of pianists that you feel shouldn’t be left out. Oscar Peterson perhaps, or Mose Allison. And Junior Mance? Man, there’s just no end to the enjoyment of the long, clever and exciting lines that he spun!

Mance was born in Evanston, Illinois in 1928, learned to play stride and boogie-woogie from his father, spent his youth in Chicago. By the late forties, Mance had recorded with Gene Ammons on Alladin and Lester Young on Savoy. Cannonball Adderley, ever the keen organizer even at a young age, recruited Mance for his Army band in the early 50s. Mance was part of the house band of Chicago’s Beehive club and backed Charlie Parker and Coleman Hawkins. Trusting the advice of Bird, Mance moved to New York City in the mid-50s. He accompanied Dinah Washington for two years. Mance subsequently hooked up again with Cannonball Adderley and cooperated fruitfully with the recently arrived alto saxophonist on the New York scene on many albums on EmArcy. Mance’s features on the Riverside albums of the Johnny Griffin/Eddie “Lockjaw” Davis outfit in the early 60s are notable as well.

The debut of Junior Mance was on Verve in 1959. Mance was part of the Dizzy Gillespie group and producer Norman Granz granted Mance the opportunity to record a solo album: Junior. Mance subsequently recorded five albums for Riverside/Jazzland: The Soulful Piano Of Junior Mance, At The Village Vanguard, Big Chief, The Soul Of Hollywood, Junior’s Blues and Happy Time. Definitely the series that made his name and kick started his career, a very fruitful one at that. All of them contain a mixture of standards and lesser-known standards imbued with blues feeling as well as pure blues tunes. Great stuff. I decided to highlight Junior’s Blues. It is a set of relatively straightforward blues music. Because of its simple harmonic framework, there’s no place to hide for the performer thus takes some doing and daring.

Mance succeeds summa cum laude, no sweat. The set list contains Mance originals Down The Line, Rainy Morning Blues and Cracklin’, Duke Ellington’s Creole Love Call, Thelonious Monk’s Blue Monk, Leroy Carr’s In The Evening, Jay McShann/Charlie Parker’s The Jumpin’ Blues, Steve Allen/Ray Brown’s Gravy Waltz and Maede Lux Lewis’ Yancey Special. Mance treats us to layered stories punctuated by his unfailing beat, flawless articulation and confident attack. It is surprising how much ideas the pianist produces chorus after chorus. His phrases are skilled but not studied and his bold lines stretch bars and are underlined by witty, decisive bass figures. His playing is simultaneously from the gut, the heart and the brain!

The lithe groove of Down The Line and The Jumpin’ Blues and the roar of Yancey Special are standout moments of pleasure. I’m particularly enamored by the eloquent Gravy Waltz. Mance’s soft-hued lyricism equates to the growth of roses and dahlias from your chest. The crisp, unfettered backing by Bob Cranshaw and Mickey Roker solidifies Mance’s flamboyant and tasteful art of the blues. Not a note or accent is wasted.

Junior Mance suffered from a stroke in 2012, which led to Alzheimer’s Disease and gradual mental decline. There has been a documentary in the making about Mance and his wife Gloria for quite a while now, Sunset And The Mockingbird, produced by Jyllian Gunther and Adam Kahan. The project needs more funding for its completion. You can donate on Kickstarter here.