Get into the bopgospel groove with organist Lou Bennett’s Enfin!. 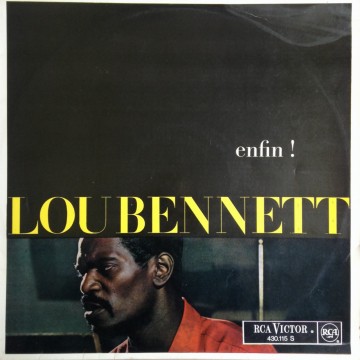 
An American In Paris, Lou Bennett never really gained recognition in the United States. Born in 1926 in Philadelphia (city of organ greats that also spawned, among others, Jimmy Smith, Jimmy McGriff and Joey DeFrancesco) Bennett was a modern jazz pianist who took up the organ under the influence of Jimmy Smith in 1956. In 1960 he left the USA for France and, intermittingly, Spain. Bennett was quite popular in Europe and developed a solid body of work up until his death in 1997 in Le Chesnay, just outside of Paris. The recording start of his career in 1960, Amen, a cooperation with fellow expat, legendary drummer and bop innovator Kenny Clarke, set him off to a good start.

Ever heard of The Bennett Machine? No, it’s not one of Philip K. Dick’s long lost SF novels. On the contrary, The Bennett Machine was an invention by Lou Bennett that strived to make life easier and more interesting for the Hammond organist. In 1978, Bennett was tired of carrying around the heavy organ and did away with the lower keyboard, fixing electronic orchestral devices in the higher keyboard instead. Notably, Bennett, one of the greatest bass pedal players of organ jazz, coupled synths to the pedals and created a distinct double bass sound. Unfortunately, the Bennett Machine occasionally broke down due to faulty wiring.

By 1963, the Machine was perhaps already brewing in the back of Bennett’s mind, but the bass patterns that the organist played – the root notes of the feet pedals accompanying left hand bass playing – still sounded like any other first-rate modernist of the day. On Enfin!, Bennett’s group consists of guitarist René Thomas, bassist Gilbert Rovere and drummer Charles Bellonzi. Rovere and Bellonzi are Frenchmen, Thomas was born in Liege, Belgium, a guitar player of note, not that well-known but a musician’s musician who receives douze points from modern jazz freaks all over the world. His 1960 Jazzland album Guitar Groove is particularly admired.

Sound and style-wise, the church roots of Bennett mix smoothly with his bop experience. Hollers, screams and the fatherly, alternating whispering and booming voice of the minister that sooths and arouses the flock function as the cherries on top of his tacit bop runs. Bennett’s organ bop discourse is mirrored almost exactly by René Thomas, whose single-line approach – he’s one of many sons of Charlie Christian in this respect – gives the session a sophisticated and occasionally fiery glow. Thomas contributes nifty bop melodies like I Remember Sonny and Indicatif, the latter merely a theme that ends both sides of the LP. Bennett wrote the blues line Enfin with a mid-tempo, attractive bounce. The group also performs J.J. Johnson’s J.J., John Coltrane’s Moment’s Notice and Ornette Coleman’s (misspelled as Arnet) Jayne. (misspelled as Jane!) A trio of songs one rarely if ever encounters on organ jazz records, interesting repertory that is tackled immaculately and with a good groove.

Misspelling is not so bad. Poor sound quality is. It is as if the tape was handled with sandpaper. Perhaps there was no tape, just sandpaper. Perhaps the French Machine had trouble with faulty wiring too. If only Rudy van Gelder could’ve come to the rescue. But Rudy was across the great pond, busy defining brilliant sounds for posterity from Jimmy Smith, John Patton, Baby Face Willette and the like. With or without RVG, the striking mix of soul jazz and bebop that Lou Bennett brought forth on the organ was an experience to behold.

For more on Lou Bennett, take a look at his extensive bio written by French guitarist André Condouant, who played with Bennett in the 80s. See here.