Perhaps Jerome Richardson ‘burnt the midnight oil’ at the Hackensack, New Jersey studio of Rudy van Gelder and hence came up with the title for his excellent debut as a leader on the New Jazz label. 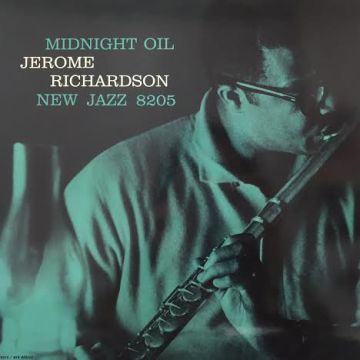 Side A:
Minorally
Way In Blues
Delirious Trimmings
Side B:
Caravan
Lyric


Acursory look at the recordings made during the classic age of hard bop and mainstream jazz cannot but reveal the name of Jerome Richardson. The Oakland, California-born flutist and saxophone player (1920-2000), who was in the bands of Lionel Hampton from 1949-51 and Earl Hines from 1954-55, is on plenty hi-profile albums by Kenny Clarke, Cannonball Adderley, Gene Ammons, Randy Weston, Sonny Stitt, Milt Jackson, Kenny Burrell, Quincy Jones, Jimmy Smith, Johnny Hodges, Dizzy Gillespie, George Benson and Oliver Nelson. Richardson was featured on Charles Mingus’ Town Hall Concert, Mingus Mingus Mingus Mingus Mingus and Black Saint And The Sinner Lady. A sought-after, versatile gentleman, who was accomplished on flute, alto flute, piccolo, clarinet and bass clarinet, tenor, soprano, alto and baritone sax. Perhaps his striking versatility is the reason why Richardson was occasionally bereft of a solo spot. However, once Richardson had a go, everyone obviously knew what was the score.

Unfortunately, recordings as a leader by Richardson were few and far between. Midnight Oil was followed by the equally impressive Roamin’ With Richardson in 1959. In the sixties, Richardson made two albums, the concept album Goin’ To The Movies and the groovy soul jazz album on Verve, Groove Merchant. His final release in 1996, Jazz Station Runaway, saw Richardson cooperating with Russell Malone, George Mraz, Lewis Nash and David Hazeltine. His two albums from the late fifties are hi-calibre affairs. Perhaps Midnight Oil has the edge on Roamin’. Immediately obvious is its excellent writing. Side A is filled with three Richardson originals, the uptempo hard bop gem Minorally, sly blues line Way In Blues and Delirious Trimmings, a fluent piece reminiscent of the crafty Mulligan tunes that he wrote for his celebrated Mulligan/Baker outfit.

Few dig the blues on flute as convincing as Jerome Richardson. This has become evident on, for instance, his contributions to Eddie “Lockjaw” Davis’ Cookbook Volume 1-3 albums. Moreover, the effects that Richardson creates with his abundant technique, guttural or breathy sounds, expand his natural blues feeling. On tenor, he’s a diamond in the rough, blowing hard and gutsy, a combination founded on excellent skills. At the time – 1958 – Richardson seems clearly impressed by John Coltrane and also possesses a bit of the urgency and bare, honest emotions of Booker Ervin.

Side B contains Caravan, marked by a hefty treatment of the rhythm during the melody and a fluently swinging B-section, and a bouncy, lithely swinging take on the frolic Artie Shaw melody Lyric. During the biggest part of the session, the combination of flute, trombone and guitar provides a pleasant, dense and cushion-soft texture, underscored by the elegant, ever-so-right phrases of Hank Jones, tasteful, spicy licks of Kenny Burrell and the tight-knit rhythm section of Joe Benjamin and Charlie Persip. Special mention of Persip, whose concise work on the New Jazz label is strikingly crisp, clever and energetic. Midnight Oil is fine Persip, but one hasn’t lived the jazz fan’s life without hearing his drumming on Mal Waldron’s The Quest!