LARRY GOLDINGS/PETER BERNSTEIN/BILL STEWART IN CONCERT – Wear and tear is not in the dictionary of Larry Goldings, Peter Bernstein and Bill Stewart. They continue to pass on sophisticated organ jazz to the next generation. 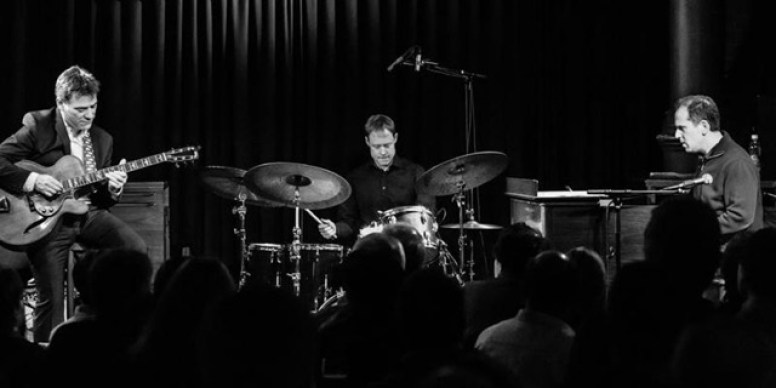 The organ jazz trio of organist Larry Goldings, guitarist Peter Bernstein and drummer Bill Stewart has been in existence for approximately 30 years. As one is liable to say, the participants in this challenging endeavor have probably been seeing more of each other than their wives at home. Corny joke. And not the kind of crack that pianist, organist and composer Larry Goldings, who functions as a dryly comic master of ceremony, would make. He is one that readily admits having stumbled upon a quasi-funny loose end. Mr. Goldings is more likely seen tapping his fingers along boyishly with the static crackle of the iPhone that resides at the edge of the keyboard of his vintage Hammond B3 organ. His wife, perhaps.

No corny jokes and few loose ends during the trio’s musical conversation at the Bimhuis in Amsterdam, ‘the best place for live music in Europe’. A good-humorous side to its hi-level musicianship, nonetheless. These gentlemen have the audience eating out of their hands. Basically, the core of their repertory is an expansion of Larry Young’s music. Larry Young is the last great organ jazz innovator who made his groundbreaking, Coltrane-influenced albums on Blue Note in the mid-sixties with, among others, Grant Green and Elvin Jones. Partly modal, partly vamp, compositions like Bernstein’s Just A Thought and Dragonfly, Stewart’s Don’t Ever Call Me Again and Goldings’ Mixed Message fall into this category. It’s their bread and butter and particularly exciting during the second set, when they have decidedly switched to second gear. Or better said, fourth. In this fast lane, Bernstein picked his composition Giant Coffee, a funkified Take Five, as a canvas for his meanest blues-based licks.

Goldings is a master at coaxing all kinds of sounds out of the organ, more often than not during the course of one of his well-crafted solos, providing layered textures and sustained momentum. Peter Bernstein’s tone, ringing with crystalline clarity, is a marvel and, with the remarkable thoughtfulness we’ve come to associate him with, he picks ideas out of the air like someone devouring myriad M&M’s. In this setting, Bill Stewart is his usual roaring but receptive self. The unannounced solo performance by Goldings, a sweet and sour sermon right out of the church where Aretha Franklin’s dad preached, takes everyone by surprise.

Tincture is on the other side of the spectrum and wouldn’t be out of place on Eric Dolphy’s Out To Lunch or Tony Williams’ Emergency. Written by Bill Stewart, its shifting tempos and eclectic harmonic movements invite the trio to partake in some moments of pure invention. No chaos, but uncluttered energy. Wouldn’t have hurt to hear more where that came from. Considering the enthusiastic ovation at the end of the evening, the audience not only liked this part but the whole sum that was delivered by this trio of contemporary American masters.