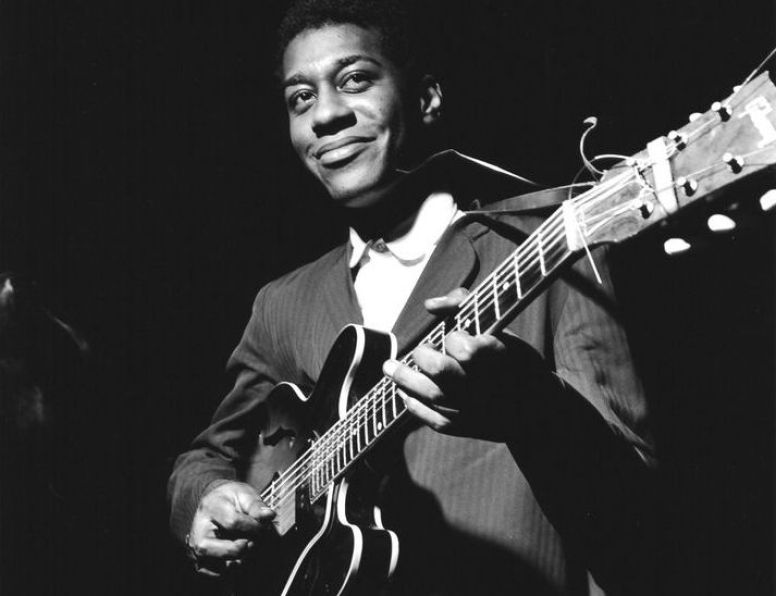 Reader Toine Metselaar sent this footage of guitarist Grant Green on YouTube. Supposedly, it’s recorded in a TV studio in Paris in 1969. A most welcome addition to the familiar footage of Green, Barney Kessel and Kenny Burrell, performing for the Jazz Scene television show at Ronnie Scott’s, London on December 26, 1969. Both performances are with the rhythm section of Larry Ridley and Don Lamont.

By 1969, Green had had some rough years. The most prolific recording artist of Blue Note in the early and mid sixties, Green – one of those supreme musician’s musicians – nonetheless failed to gain broad public recognition and was at a low ebb. Struggling with drug addiction, Green had also spent some time in jail. However, in December 1969 Green was back on the Blue Note roster. Convinced by his friend, organist Reuben Wilson to focus on funk and popular tunes, Green was featured firstly on Wilson’s superb, well-received Love Bug album including Lee Morgan, George Coleman and Idris Muhammad, and then released his Blue Note comeback album as a leader, Carryin’ On. Love Bug was recorded on March 21, Carryin’ On on October 3. Preceding those albums, Green was also featured on two soul jazz albums of the Prestige label: Rusty Bryant’s Rusty Bryant Returns (February 17) and organist Charles Kynard’s Soul Brotherhood. (March 10) Thus, Green was back at Rudy van Gelder’s famed Englewood Cliffs studio, and desperately seeking recognition.

So Green’s appearance in London (it’s unclear whether Paris was broadcasted) came at the right time. It came about, however, quite by happenstance. As Sharony Andrews Green (Green’s daughter-in-law) tells in her biography of Green, Rediscovering The Forgotton Genius Of Jazz Guitar, Green wasn’t first choice: ‘He was determined to give it one last try. So he did the unthinkable. Realizing he needed an international reputation, he overcame his fear of flying and got on a plane to attend the London Jazz Expo. He shared the stage with Kenny Burrell and Barney Kessel. It was actually a fluke that he even participated. Tal Farlow had been promised as the third man, but Farlow canceled and Grant stepped in. The fact that his name wasn’t advertised on the marque outside made him play “that much harder,” Grant would tell an interviewer.’

To see Green play that much harder as the only soloist in Paris, to witness the master at work for longer than the snippet that has heretofore been available, is something many fans are extremely thankful for, yours truly included. Green, employing his unique single-note line style, horn-like approach and sizzling, singing tone, plays, among others, I Don’t Want Nobody To Give Me Nothing, (the James Brown tune that is featured on Carryin’ On, the trio setting isn’t really appropriate for funk but it’s a pleasure to see Green play it), Sonny Rollins’ Airegin and Sonnymoon For Two. And note the intense manner in which Green recovers from some loose ends in his beautiful version of a Brazilian tune (Manha de Carnival? Or?) and his fireworks intro and coda of a down-home 12-bar blues excursion.

Only after a rediscovery by break-beating aficionados in Great-Britain in the late eighties and the subsequent re-issues of his Blue Note catalogue, long after Green’s death in 1979, did fame finally came to the indomitable guitarist.