Frank Strozier’s March Of The Siamese Children makes abundantly clear that the overlooked alto saxophonist and flute player was an advanced hard bop force to reckon with. 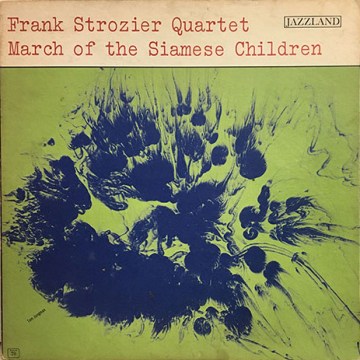 Side A:
March Of The Siamese Children
Extension 27
Something I Dreamed Last Night
Don’t Follow The Crowd
Side B:
Our Waltz
Will I Forget?
Lap
Hey, Lee!


Considering the wealth of great saxophonists in the sixties, evidently Frank Strozier found a way to stand out. Strozier, now 80 and inactive for decades, has worked towards a hard bop style with alluring, adventurous touches, delivered with an irresistible combination of fury and sweetness. Born in Memphis, Tennessee in 1937, Strozier was teenage buddy with Phineas Newborn Jr., Booker Little, Harold Mabern and George Coleman. His career was off to a promising start. Relocated to the Chicago in the late fifties, Strozier struck up a fruitful cooperation with MJT, the group of drummer Walter Perkins, resulting in a number of albums on the VeeJay label, notably MJT + 3 in 1959. Strozier also played on The Young Lions, the 1960 VeeJay session of rising stars Lee Morgan and Wayne Shorter. As if that wasn’t enough, Strozier’s first album as a leader that same year, The Fantastic Frank Strozier, also on VeeJay, included Booker Little and the rhythm section of Miles Davis’ epic Kind Of Blue, Wynton Kelly, Paul Chambers and Jimmy Cobb.

His subsequent years in New York City in the early 60s and on the West Coast for the rest of the decade kept Strozier in high demand. He played briefly in the Miles Davis Quintet in 1963, between the tenures of Hank Mobley and George Coleman. In Los Angeles, Strozier had extensive stints in the bands of drummer Shelly Manne and trumpeter Don Ellis. Strozier recorded sporadically in the seventies, when an alledged disappointment with the music business caused Strozier to quit playing altogether. Other notable albums and features are Long Night (Jazzland, 1962), What’s Goin’ On (Steeplechase, 1977), Booker Ervin’s Exulation! (Prestige, 1963), Roy Haynes’ Cymbalism (New Jazz, 1963), McCoy Tyner’s Today And Tomorrow (Impulse, 1964), Chet Baker’s Baby Breeze (Limelight, 1965), Shelly Manne’s Boss Sounds (Atlantic, 1966), Oliver Nelson’s Live From L.A. (Impulse, 1967), Sonny Stitt’s Dumpy Mama and Woody Shaw’s Little Red Fantasy (Muse, 1976). A review of Strozier’s Cool And Cloudy and an insightful appraisal of his jazz personality can be found on Steven Cerra’s excellent Jazz Profiles blog here.

The urgent, lean alto of Strozier is featured on four tunes: the free-flowing Strozier composition Extension 27, Harold Mabern’s Hey, Lee!, Bill Lee’s Lap, a nifty blues melody consisting of the archetypical 12 bars, which are, to be sure, far from a straightjacket for Strozier, a storyteller revealing abundant quizzical, masterful sounds of surprise. Last but not least, Strozier takes to heart the title of the album’s ballad, Don’t Follow The Crowd, his alto ripping hypnotically through the classy take, much like the great Jackie McLean, with a tone that’s less acerbic, but still a bit edgy. Strozier likes to gamble and isn’t afraid of emotions, switches naturally from soft-hued, soothing phrases to dramatic, rousing sentences. Besides, he’s got the blues. A combination of assets that lifts the Fain, Magidson and Yellen ballad to a higher plain.

Strozier is excellent on flute as well. March Of The Siamese Children stands out, his flute weaving sprightly and authoritatively through the pretty melody and the appealing interplay of exotic and straightforward rhythm. The beautiful composition was written by the legendary team of music theatre writers Rodgers and Hammerstein II for the musical The King And I in 1951. It was revived for the movie version in 1956 starring Yul Brynner and Deborah Kerr. See here and compare it with Strozier’s version, the opening tune of the album. A great example of the jazz musician’s ability to re-envision material in accordance with his own feelings and ideas and the importance of the show tune writers as suppliers of intelligent blueprints for jazz improvisation.

Strozier’s March Of The Siamese Children is simultaneously mellow and probing. Intriguing, like Strozier himself, a distinct personality deserving much more attention than he has until now received.