Live Where The Action’s At! is a typical album of organist Jimmy McGriff: ultimate groove, smart modern jazz ingredients. 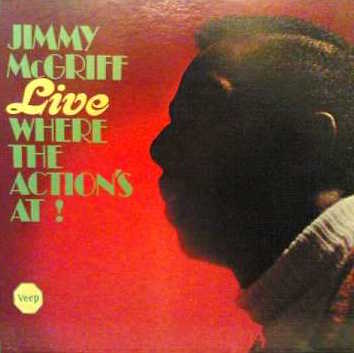 Side A:
Where It’s At
When Johnny Comes Marching Home
Uptight
Frugal Bugle
Side B:
Georgia On My Mind
Goin’ Out Of My Head
Robbins Nest


Philadelphian Jimmy McGriff, (1936-2008) was an enormously popular organist who recorded in a variety of settings, from r&b, soul, pop, funk to big band. Late in life McGriff said that he felt forced to continue to record commercial stuff once he started scoring good-selling singles and albums. Glad to be able to pay them bills but… Presumably, McGriff referred to his work with Sue Records, where he scored his first hit in 1962 with I’ve Got A Woman and, particularly, Solid State. Solid State was the company of Sonny Lester, who tried to mold McGriff in the same popular vein as Jimmy Smith, one of McGriff’s mentors, who reached soul jazz stardom in the smart hands of Verve’s producer Creed Taylor.

Nevertheless, McGriff’s blues-drenched style almost always shone through. Lest we forget, McGriff’s records like Groove Grease (on Groove Merchant, also produced by Sonny Lester) are legendary funk jazz artifacts. And, once the soul jazz era had largely come to its conclusion in the late seventies, McGriff recorded his share of straight-ahead jazz albums, particularly on Milestone in the eighties and nineties during cooperations with Hank Crawford, Red Holloway and David “Fathead” Newman and, later on, the awesome contemporary tenor saxophonist Eric Alexander.

I think Jimmy really enjoyed what he was doing on the night that was recorded for the album Live Where The Action’s At!. The action’s at The Front Bar in Newark. One of the places – both bar and city – where they ate soul jazz like the cookie monster devoured biscuits. McGriff is accompanied by guitarist Thornel Schwartz, who played and recorded with Jimmy Smith in 1956 before hooking up first with Johnny “Hammond” Smith, then with McGriff – staying in the same territory! – and drummer Willie Jenkins during the early and mid-sixties. A tight-knit, prolific working and recording band. Production-wise, the album may be so-so, the drums sounding muffled, but as far as the standard of playing is concerned, it’s a gem! Somehow, the organist adapts diverse tunes as Stevie Wonder’s Uptight, old warhorses as Georgia On My Mind and Robbins Nest to that very special (and sweaty) climate region of planet McGriff. For one thing, his unforgettable sound, gritty, and straight from the baptist church, never fails to raise the hairs on your arms.

After building up momentum with bluesy phrasing and sparse flurries of notes, McGriff generally keeps up the groove beyond belief, working around short, screamin’ recurring figures, his touch percussive, his occassional ‘drone’ (the coupling of right hand lines with a sustained left hand chord) both hard-swinging and tasteful. He’s getting down to the nitty-gritty with bluesy McGriff originals like Where It’s At and Frugal Bugle. Raw McGriff blues is usually underlined by hip voicings, revealing a genuine taste and capacity for modern jazz playing. Traveling the hard road with Jimmy McGriff, Eric Alexander once said, while it means being provided with subtle accompaniment, is also a lesson in the skills of entertainment. Obviously, Live Where The Action’s At! is exceptional in both departments, and then some.