Basic and bluesy mainstream jazz was the recipe of piano trio The Three Sounds, led by Gene Harris. Delicate group interplay was its forte. 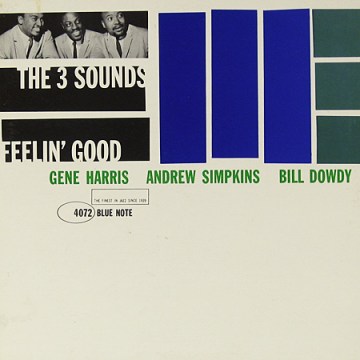 Side A:
When I Fall In Love
Parker’s Pad
Blues After Dark
I Got It Bad (And That Ain’t Good)
Side B:
Straight No Chaser
I Let A Song Go Out Of My Heart
It Could Happen To You
Two Bass Hit


The original line up of The Three Sounds of Gene Harris, bassist Andrew Simpkins and drummer Bill Dowdy recorded prolifically and very succesfully for Blue Note (and Limelight) between 1958 and 1965, until Dowdy dropped out to concentrate on teaching. The Three Sounds lasted till 1971 in various combinations, up to the Blue Note album The Three Sounds, which was essentially a Gene Harris album, as none of the original members were present. Highlights include the outfit’s debut Introducing The Three Sounds, their involvement with alto saxophonist Lou Donaldson, LD + 3, Black Orchid and Live At The Lighthouse. Their cooperation with Stanley Turrentine, Blue Hour, is a crowd favorite. Probably on account of Turrentine’s bluesjazz brilliance. The accompaniment is rather unremarkable.

Once pianists like Gene Harris had a song or album that did well on the charts, it was a logical step for both the label and artist to stay in that bag and see if a follow-up would sell equally well as well. Generally, soul jazz was music for Average Jimmy & Josie from the bowels of the black neighbourhood. Before having ribs at Hot Barbecue, the couple might go to the local record shop (or even barbershop or gas station) and fetch a record of their favorite artist, afterwards they might visit a bar and put a nickle in the jukebox. Jimmy & Josie musn’t be confused with the 21st century average couple, which listens to whatever Warner Bros puts on their plate. At that time, before the corporate world began to reign supreme and the inner cities desintegrated due to the introduction of crack and the subsequent criminality, couples like Jimmy & Josie not only dug r&b but also chose jukebox tunes from Gene Ammons, Willis Jackson, Jimmy Smith, Cannonball Adderley and pianists like Les McCann, Ray Bryant and Ramsey Lewis. Besides tapping their feet, they might even discuss the differences in styles. True, no jive.

Harris is not in the league of McCann, Bryant and Lewis. While they score goals, Harris warms the bench. Soul jazz at its best is brought with distinctive traits. Where, for instance, McCann brings the roar of a sermon, Bryant a brilliant left hand full of jazz tradition, Harris perseveres his blues clichés without adding anything suprising or peculiar. To be sure, Harris contributed suavely to trumpeter Nat Adderley’s Branching Out, tenorist and flutist James Clay’s Double Dose Of Soul and organist Melvin Rhyne’s Organ-Izing. In the eighties, Harris’ longest run was with the tasteful genius of the upright bass, Ray Brown, from 1984 to 1991. Once out of the soul jazz context, Harris fulfilled his potential as an excellent modern jazz pianist.

Feelin’ Good must be added to the list of top-rank Three Sounds albums. At its best, the trio responds to each other’s archetypical blues and r&b accents like trapeze artists that have practised their tricks longer than Nurejev did his ballet moves. Extremely tight-knit. This groove is most apparent in the mid-and uptempo tunes like Two Bass Hit, Thelonious Monk’s Straight No Chaser and Parker’s Pad, a Harris original that brings to mind Things Ain’t What They Used To Be. These tunes slowly but surely pick up steam and climax not so much with abandon but a confident bounce that suggests a longing to gently nudge the audience into the hands of the angels rather than the lap of God with fire and brimstone. Excellent trio interaction. At its worst, Harris placidly mumbles his way through a ballad, leaving one cold with series of forgettable, formulaic phrases. A bummer sandwiched between the songs that make up a set of flawlessly executed, unambitious, groovy soul jazz.