Powerhouse is a groove gem from organist Chester Thompson, who spent the biggest part of his career in funk group Tower Of Power and mega act Santana. 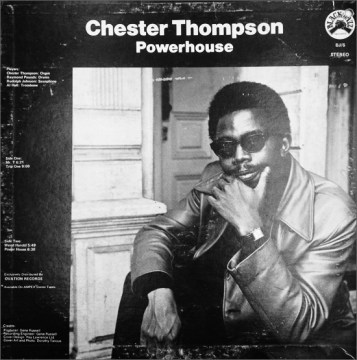 Side A:
Mr. T
Trip One
Side B:
Weird Harold
Powerhouse


Of all the musicians that recorded for the short-lived, innovative Black jazz label, organist Chester Thompson’s career, obviously because it was outside jazz, was most succesful. Thompson, who had grown up playing organ in church, and like many of his generation fell under the spell of modern organ jazz pioneer Jimmy Smith, toured the chitlin’ circuit with saxophonist Rudy Johnson in the late sixties. After his record debut Powerhouse in 1971, Thompson joined Tower Of Power, playing a crucial role in the popular and inventive funk group from 1973 till 1983. Thompson’s stretch on organ and keyboards with Carlos Santana lasted an impressive quarter century, from 1983 to 2009. During the mid-eighties, Thompson temporarily changed his name to Chester “T” Thompson to avoid confusion with the band’s drummer, Chester “Hey, I’m the real Chester!” Thompson. Leaving Santana, Thompson returned to his straigh-ahead jazz roots, recording Mixology in 2010 and performing frequently in the Bay area.

Black Jazz was founded in 1971 by pianist Gene Russell and Dick Schory, former drummer, audio tech and owner of Ovation Records, which came to distribute Black Jazz. It specialized in funk jazz and free jazz and shares the honor with Stanley Cowell and Charles Tolliver’s Strata-East label, which was also founded in ’71, of being a groundbreaking jazz record label of Afro-American ownership. Like Strata-East, Black Jazz is highly collectable and characterised by trademark, classy black and white sleeves. Powerhouse is number 6 in a catalogue that runs to only 20 albums and includes albums by pianists Walter Bishop Jr. and Doug Carn, who was a bestseller and the label’s most succesful artist.

A versatile player, Chester Thompson embellishes slow-dragging funk cuts like Powerhouse (listen here) with tacky blues voicings not unlike those of the great Jimmy McGriff, while his propulsive right hand lines occasionally decide to dribble playfully through the defense of the astringent, basic chords changes. The mid-tempo Trip One’s a more modern jazzy tune, in which Thompson’s style is close to the bebop-infested, pianistic lines of Jimmy Smith and Don Patterson. Underneath the cuts of Powerhouse boils a fat groove provided by drummer Raymond Pound (and Thompson’s bass lines) that show the influence of master funk jazz drummer Idris Muhammad. It may lack Muhammad’s crisp touch, but it’s deep and baaaaad.