Who else than the indomitable Art Blakey was qualified to present an African drum extravaganza? Maybe not so shocking today, Drum Suite was a progressive album in the late fifties. 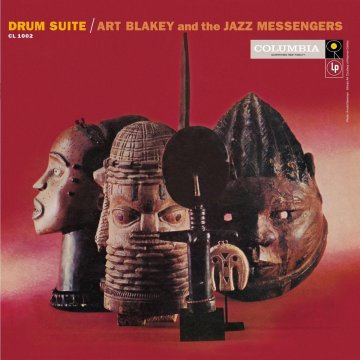 Side A:
The Sacrifice
Cubano Chant
Oscalypso
Side B:
Nica’s Tempo
D’s Dilemma
Just For Marty


The album is made up of two sessions. Side A consists of exotic, Afro-Cuban rhythms and the flipside is a swell session of Blakey’s working band of the period consisting of alto saxophonist Jackie McLean, trumpeter Bill Hardman, pianist Sam Dockery and bassist Spanky DeBrest. The first part (as well as the classy album cover) suggests that Art Blakey was eager to put Africa back into jazz. Yet, in drummer Art Taylor’s book of interviews Notes And Tones, (Da Capo, 1982) Blakey insisted that he has always felt that ‘our music has nothing to do with Africa. (…) No America, no jazz. (…) African music is entirely different, and the Africans are much more advanced than we are rhythmically, though we’re more advanced harmonically.’ In this view, which perhaps unintentionally ignores the impact of both Afro(-Cuban) rhythm and imported European musical standards on the cradle of jazz, New Orleans, Drum Suite isn’t jazz but African music. Or better said, African music played by American men of jazz. But Blakey would know. The Pittsburgh-born drummer traveled in Africa for almost a year in 1949. By his own account, just listening, not drumming.

Tossing two sessions together on an album was a not uncommon practice in the classic jazz era. It could have a number of reasons. Sometimes, studio time ran out. And occasionally, musicians weren’t available anymore due to other obligations. Companies also might go for the easy way (and/or a fast buck), rounding out albums with sessions from the vault. Such albums usually lack coherence, an encompassing idea. Drum Suite is incoherent. But it’s a high quality affair, so who cares?

Beat happening! The Afro-Cuban tunes, wherein Blakey is assisted by drummers Jo Jones and Charles “Specs” Wright, the bongo’s of Candido and Sabu Martinez, bassist Oscar Pettiford and pianist Ray Bryant, sans horns, get you into the groove, no doubt. The aptly-titled The Sacrifice starts off with an indelible African backwoods chant, slowly but surely developing into a multi-layered rumble of toms, flavored with chubby chords and staccato lines by Ray Bryant. The tom-figure from the opening is repeated at the end. Interestingly, it’s reminiscent of the drum part in Richard Strauss’ Also Sprach Zaratustra, which was used to such imposing effect in Stanley Kubrick’s epic 1968 science-fiction movie 2001 A Space Odyssee.

Ray Bryant will undoubtly have been thrilled by the re-visit of his original tune Cubano Chant. Initially, Bryant had recorded it in 1956 on the Epic LP Ray Bryant Trio, including, coincidentally, Jo Jones and Candido. The broadened palette of instruments results in a piece of tough swing, highlighting Bryant’s inventive left hand, which generally puts emphasis on the low register and down-home fills that reach back to the era of swing, blues and stride. Staccato, swinging right hand lines weave in and out of Bryant’s left hand bottom. Bryant would revisit the uplifting Cubano Chant a number of times during his career. Finally, Oscar Pettiford’s Oscalypso ends the Afro-Cuban side on a groovy note. But three tunes in, the pounding percussion sounds of the basic calypso riff might start to get up one’s sleeve.

Obviously, despite Blakey’s assesment of his own, ‘American’ style, Blakey’s drumming incorporated some African devices, such as the altering of pitch with the elbow, tangible rim shots, and multiple rolls on the toms: an armoury of effects to stimulate the soloists. Some of these assets, embellishing the signature Blakey style of a propulsive beat and thunderous polyrhythm, are present on the other session of Drum Suite, a date of December 13, 1956. They especially fill Bill Hardman’s fast-paced, swinging tune Just For Marty to the brim. It’s a top-rate session with vigorous blowing by Jackie McLean and a number of jubilant, fluent statements by Bill Hardman, an underestimated player with a delicious, sweet-sour tone.

Before Blakey gained widespread recognition with the Blue Note album Moanin’ in 1958, it was hard to make head or tail out of the drummer’s recording career, as Blakey recorded albums for a varying string of labels, including Vik, Jubilee, Bethlehem, Atlantic and Columbia. Yet, however disparate Blakey’s catalogue of that period between the early classic Jazz Messenger sides on Blue Note and successful comeback on the famous label in 1958 may be, it was of a continuous high level. The singular Drum Suite album is no exception.