Horace Parlan is a very interesting pianist, not only because of his peculiar playing style that is due to his handicapped right hand. He’s an essential hard bop player and made a lot of recordings in the post bop-style. But the borders weren’t strict, Parlan puts a lot of blues in post bop and a big dose of adventurous lines in his bluesy output. 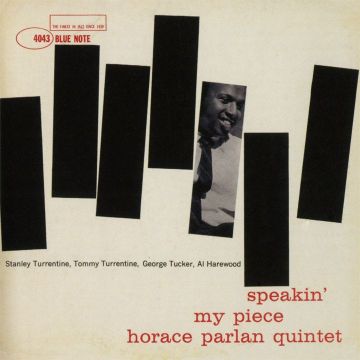 Side A:
Wadin’
Up In Cynthia’s Room
Borderline
Side B:
Rastus
Oh So Blue
Speakin’ My Piece


Take Up In Cynthia’s Room from Parlan’s second album as a leader on Blue Note, Speakin’ My Piece. It’s a medium-tempo swinger with graceful blues licks and blue notes, elegant, like the whole album, but many choruses are embellished with idiosynchratic entrances and percussively stamped-out glissandos as well. Parlan also doesn’t shy away from suddenly going up an octave. Pleasant elements of surprise.

Horace Parlan was stricken with polio as a baby, which resulted in the partial crippling of his right hand. The playing style of the Pittsburgh-born pianist – poignant left hand lines and voicings and sparse, rhythmic right-hand comping- attracted the attention of visiting jazz pros in the early fifties. From 1952 to 1957, Parlan played with Sonny Stitt. Thereafter, Charles Mingus invited him to work in his Jazz Workshop. Parlan’s singular style is a great asset of the classic Mingus albums Mingus Ah Um and Blues & Roots.

In 1972, Parlan moved to Copenhagen, Denmark. Parlan became a fixture of the Danish scene (and its major jazz club, Club Montmartre), which already was graced with the presence of other American expatriates as Dexter Gordon, Kenny Drew, Ben Webster and Archie Shepp. With Shepp, Parlan recorded the influential, gospel-drenched Goin’ Home in 1974, the recording of which, alledgedly, brought tears to the duo’s eyes during each tune. Throughout the seventies and the early eighties, Parlan recorded prolifically on the Danish label Steeplechase.

Nowadays, Parlan still lives in the small village of Rude near Copenhagen. The 86-year old retired and blind pianist, who has been living in a nursery home for some time now, talked to BBC World Service in 2015. I wrote about that touching portrait just a while ago.

Speakin’ My Piece is part of a series of consistent, top-rate albums that Parlan made with his regular trio for Blue Note in the early sixties. The trio, including bassist George Tucker and drummer Al Harewood, came to be known as Us Three, a classic rhythm unit of the Blue Note roster with an unusually unified sense of purpose. The line-up’s first album for Blue Note was named Us Three (1960). Parlan is the last man standing, as George Tucker died from cerebral hemorrhage in 1965 (allegedly while performing with Kenny Burrell) and Al Harewood passed away in 2014. As you may well know, the jazz dance outfit US3 used the catchy name and hit big with 1993’s Hand On The Torch, sampling several classic Blue Note recordings in the process.

But why bother with forgettable hybrids when the real deal is available?