Do you know that feeling of hearing a piece of music that quite literally makes you jump for joy against the ceiling? The music within the grooves of the album Fathead: Ray Charles Presents David “Fathead” Newman has that kind of effect. Its bucket boils over with intoxicating energy and exhilarating swing. 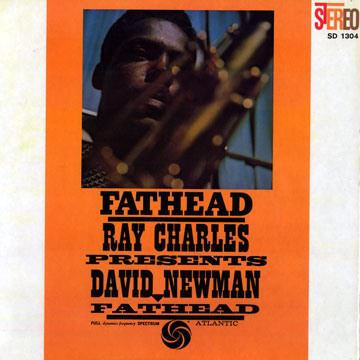 Side A:
Hard Times
Weird Beard
Willow Weep For Me
Bill For Bennie
Side B:
Sweet Eyes
Fathead
Mean To Me
Tin Tin Deo


Texan saxophonist David Newman had been a part of the Ray Charles band since 1954, mostly on tenor, but he played baritone and his first choice, alto, as well. Newman’s solo debut on Atlantic came about on the instigation of Ray Charles. The decision to back the saxophonist with the entire Ray Charles crew proofs to be a wise one. What a group of players it is! They bring coherence and continuity of thought while, simultaneously, deliver remarkable individual statements. Brother Ray himself contributes short solo’s on every tune. These are some of the many highlights of this session.

Central to the proceedings is the lively tenor and alto of David “Fathead” Newman. For a start, he makes Hard Times – the Paul Mitchell tune, not the Ray Charles blues – completely his own with a hard pitch and vocalised style; a combination that suits this bouncy, mid-tempo swinger very well.

There are a couple of outstanding tunes and arrangements by Hank Crawford, (still credited as Bennie Crawford) who was chief arranger and saxophonist in Ray Charles’ group and plays fresh and adequate baritone saxophone for this occasion. Weird Beard (a giddy reference to trumpeter Marcus Belgrave’s goatee) is a Horace Silver-type, old-timey blues tune with a characteristic bridge. It has the kind of heavy swing and deep blues feeling comparable to the grooviest cuts of Cannonball Adderley and Art Blakey’s Jazz Messengers. Newman blows brisk and confident phrases in your face that you’re not likely to forget.

Bill For Bennie is played by the sextet but sounds like a big band. It’s an uptempo swinger. All soloists are fiery and the unisono horn parts stimulate them to even more intense parts. This group is so amazingly tight! The fast-tempoed Sweet Eyes is another winner by Hank Crawford. The tough, jive-style big band drumming elevates the tune to relentless swing. Ray Charles deserves special mention for the way he brings out the best of the soloists on this album with playful triplets and clear-headed left hand chords. The swift solo of Ray Charles also reminds us (and reminded the listeners back then) of the more than average jazz knowledge that the foremost progenitor of soul music had in stock.

As a matter of fact, it is obvious that the whole band has got its chops together. There isn’t a wrong note and every one of them is full of vigour. The jazz world had become acquainted with The Ray Charles Band’s jazz credentials at the Newport jazz festival, as it reportedly left the crowd and critics stunned. Mostly, David Newman takes first choruses, as in the blues standard Willow Weep For Me, which he graces with heartfelt alto work. The trumpet solo of Marcus Belgrave in the blues tune Fathead is a mix of buoyancy, long flowing lines and above average proficiency.

With the help of his mates from the Ray Charles Band, and the boss himself, David “Fathead” Newman delivered a truly stunning album.