The four personalities on organist Larry Young’s first album on Blue Note Into Something! are really into something very good. Individually, they are on top of their form and, moreover, build on eachother’s strenghts and as such deliver a tight, cutting-edge organ jazz album. 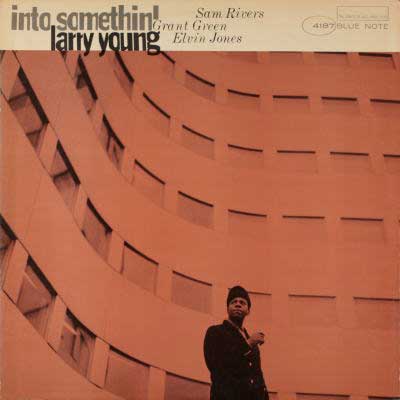 Side A:
Tyrone
Plaza De Toros
Side B:
Paris Eyes
Backup
Ritha


It would be a year until Young would turn in follow-up Unity, the organist’s unequivocal masterpiece. Into Something! is less challenging harmonically, but far from plain. Young was an extraordinary Hammond organist if ever there was one. His fresh solo’s, turning around the axes of the compositions’ blue prints, are top-notch throughout the album. Listening to them, the uncommon and fantastic image arises of a reed that is somehow attached to the Hammond B3’s keyboard. Cause that’s the impression Young’s lines give: of statements from front-line horn men of that period such as Joe Henderson and Booker Ervin. That Larry Young has been dubbed the ‘John Coltrane of the Hammond organ’ is a bit cockeyed, it nevertheless says a lot about Larry Young’s standing and innovative legacy.

Young’s artful Hammond approach is particularly noticable on Tyrone. Once the relatively simple blues theme is ended, Young throws himself headlong into a solo that is a demonstration of emotional directness, coherence and subtle musical intellect. Moreover, it’s cooking.

Tyrone is a standout track. The other one is Plaza De Toros, an alluring, groovy Spanish-type composition by guitarist Grant Green, who shows his remarkable depth as a soloist, which is complemented by a canny, sharp attack. It also includes (as does the whole album) delightful work from tenorist Sam Rivers; dark-toned, idiosyncratic passion play from a reedman adding touches of Ornette Coleman, Roland Kirk and Archie Shepp to his own distinct personality. It’s refreshing to hear such an original type of tenor saxophonist on an organ jazz recording.

Aside from the fine rapport between these four top-class musicians, the key to the album is the typical polyrhythmic spree of drummer Elvin Jones. It lifts the compositions well above their already solid standard and inspires his colleagues to put their best foot forward; especially on the two standout tracks, but also on the three remaining, more laid-back (Elvin Jones-style ‘laid-back’) tunes of the album. Prior to Into Something!, Jones, Green and Young played on Grant Green’s Talkin’ About and their alchemy on Larry Young’s November 12, 1964 session for Into Something! is striking.

Four days later, on November 16, 1964, and half a year later, on March 15, 1965, they would continue their genial rapport on, respectively, Grant Green’s Street Of Dreams and I Want To Hold Your Hand. Blue Note headquarters, generally, and wisely, kept the advance guard of jazz as close together as possible.