There are a number of reasons why Groove is a significant, endearing album that is perfect for beginners and essential for geeks of the ‘Organ Jazz Admiration Society.’ The most important reason, I think, is the combination of the extremely swinging individuals Les McCann, Richard “Groove” Holmes and legendary tenor saxophonist Ben Webster. 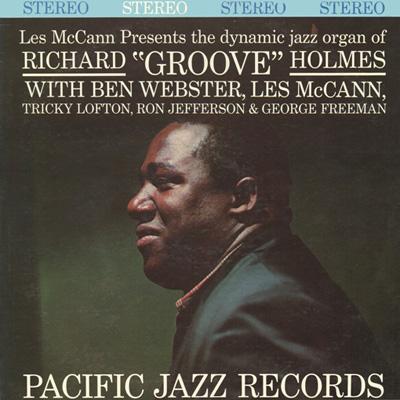 Side A:
Them That’s Got
That Healin’ Feelin’
Seven Come Eleven
Side B:
Deep Purple
Good Groove


It almost never took fruition. The group was brought together in the studio for the purpose of producing a Les McCann vocal album. The warming-up, however, brought about such enthousiasm and good feelings, that McCann decided to cut an instrumental album first. Holmes was cast as leader, a generous gesture from Pacific and McCann, who discovered the organist in the first place, a short while prior to this session in a Pittsburgh club.

Because of the haphazard circumstances, one might describe Groove as a blowing session; that is, a session usually described as containing straightforward blues-based tunes and well-known standards built on the AABA-chord structure that leave a lot of room for the musicians to stretch out. Things, however, aren’t always that simple. There are mediocre blowing sessions and good planned sessions, and vice versa. To further complicate the issue: most blowing sessions are planned one way or the other, so where’s the dividing line? At any rate, this album’s simplicity works as a vehicle for honest, unforced and coherent blowing indeed. Take a listen to Ben Webster’s solo on Good Groove and you’ll know what I mean. Relaxed, cliché-free marvels like that certainly don’t come “easy”.

The instrumentation of Groove is an asset. For one thing, there’s the unconventional combination of piano and organ. It’s quite an accomplishment that Holmes and McCann succeed in avoiding an overtly heavy sound, considering the power of the monstrous Hammond machine. Indeed, the lighthearted combination is fair proof of the considerable artistic intellect of these men. In That Healin’ Feelin’ – an uplifting tune imbued with gospel piano rolls and a tacky solo by guitarist George Freeman – Holmes’ chords behind McCann’s piano are pleasantly soft-hued.

The joy of listening to Holmes is evenly divided between his carefully crafted solo’s and superb sense of dynamics. He uses different textures of Hammond sound, whichever texture is appropiate for the occasion. In the second part of That Healin’ Feelin’, during the horn solo’s, the organist puts in full-bodied, Basie-type, almost accordian-like chords, enlivening the proceedings considerably. His methods are replenished by drummer Ron Jefferson, who shows to possess the knowledge of where precisely to place classic swing accents; spot on! Groove Holmes is a masterful bass pedal player and therefore makes for a solid rhythm section with Jefferson and McCann. To furthermore stress Holmes’ understanding of dynamics, I’d like to point out the nifty, ‘thin’ sound the organist uses to solo with in Deep Purple and the question-and-answer swinger Good Groove.

An album such as this usually has a ballad included. Not Groove. It’s not sorely missed. Of course, Ben Webster is a brilliant balladeer, but the relaxed, mid-tempo Deep Purple acts as a ballad in disguise. Ben Webster’s ‘breathy’ statements are breathtaking. On the rest of the tunes, Webster honks and swings fluently. Trombonist Lawrence “Tricky” Lofton competently and joyfully adds to the old-timey sentiments.

Benny Goodman and Charlie Christian’s up-tempo, fluid classic Seven Come Eleven rounds off Side A of a relaxed, spontaneous album, combining the artistry of the already very mature debutant Groove Holmes and ultra-swingers Les McCann and Ben Webster. I can’t help but wear a broad smile on my face everytime it has been turning on the table. I’m sure it’ll do the trick for you too.