No, we’re not talking about a sensational album here. Not even a great album. Nor should we expect the mellifluous groove that is part of Richard Holmes’ inventory or the solid bebop statements of Jimmy Smith. Or, for that matter, a telling solo that extends the two minute time frame. Billy Larkin & The Delegates play a rather lame version of It’s A Man’s World. Jenne is synonymous for Duke Pearson’s Jeannine, but lacks verve and immediacy. 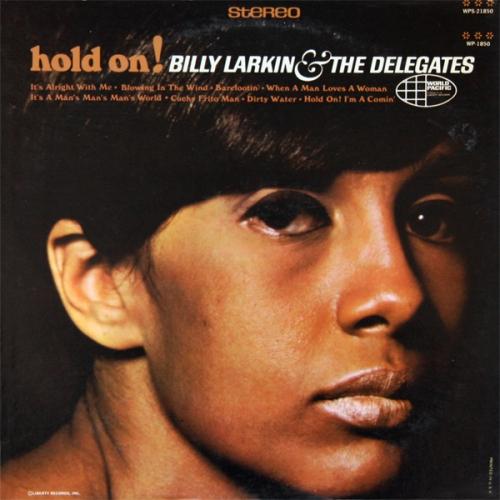 Side A:
Hold on! I’m A Comin’
Cuchy Frito Man
It’s A Man’s Man’s Man’s World
Barefootin’
Jenne
Side B:
Dirty Water
Blowin’ In The Wind
It Ain’t Necessarily So
When A Man Loves A Woman
It’s Alright With Me


But that’s one helluva take on Hayes and Porter’s classic soul cut Hold On, I’m Comin’. It has relentless drive, a big sound and a drum performance that should’ve made it hard for Sam & Dave to resist including Kilpatrick on their tour band payroll.

R&B tracks such as Dirty Water and Barefootin’ (part of its theme is a verbatim quote of Nat Adderley’s Work Song) are in Pigmy-vein, Pigmy Pt 1 being a pretty raucous, Jimmy McGriff-type 45rpm by Billy Larkin that is a favorite on many a retro DJ’s turntable.

The popularity of Larkin’s Portland, Oregon outfit didn’t really extend beyond the borders of the West Coast region. They made seven albums for Aura and World Pacific. The question is not if you find a couple of tunes on each of those albums that’ll kickstart the hips of any lover of happy-go-lucky soul jazz into furtive action. The question is when the motor starts-a-hummin’.

One thought on “Billy Larkin And The Delegates Hold On! (World Pacific 1966)”