A Blue Note bestseller, Move Your Hand obviously struck a chord among Hammond lovers as well as broader jazz fans. For a live engagement that centers on slow and mid-tempo grooves, this was quite an achievement. Perhaps Lonnie Smith’s greatest talent is to bring us into a trance and have us begging for more. 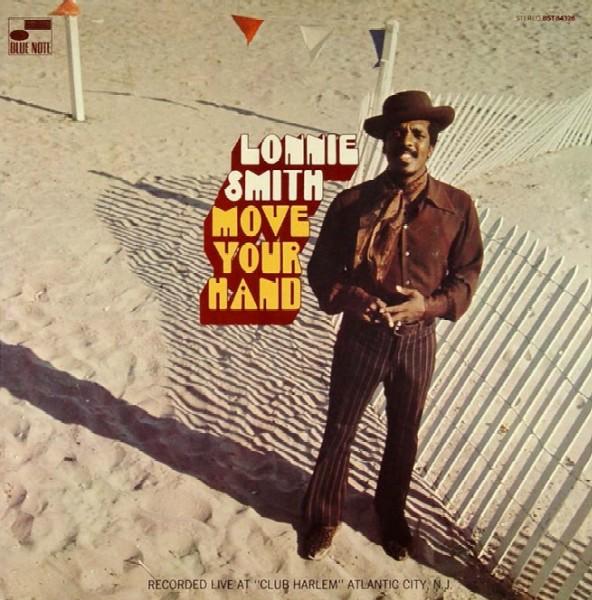 on August 9, 1969 at Club Harlem in Atlantic City, New Jersey

Side A:
Charlie Brown
Layin’ In The Cut
Side B:
Move Your Hand
Sunshine Superman


Move Your Hand’s repertoire stands out as well. Smith original Move Your Hand doesn’t leave much to the imagination. On a soul jazz level its blunt erotic message fits in with the mores of James Brown’s Sex Machine or The Beatles’ Why Don’t We Do It In The Road? Lonnie Smith’s raspy voice leaves us with a big grin. (If Move Your Hand reveals a healthy case of machismo, on like-minded jam Peace Of Mind – from Live At Club Mozambique – May 21, 1970 – sarcasm has the upper hand on sardonism. Smith’s preliminary talk certainly gave that rough and funky date an unusual flavor: “I don’t take no stuff from no woman.”)

Presumably, flower child Donovan’s Sunshine Superman’s bravado, albeit LSD-driven, perfectly added to Smith’s feelings at that time. (coincidentally, Smith recorded at Club Harlem just a week prior to Donovan’s appearance at Woodstock) Lonnie Smith has that wizardly edge on a Hammond B3 that sounds like a dream. He phrases relaxed and astute, taking his time to build a meaningful story full of interesting asides and unexpected, probing little climaxes in the upper register. ‘The pocket’ seems to come natural to Smith. The organist stays in it effortlessly, which is absolutely essential for the album’s attraction.

Move Your Hand’s appeal is also in large part due to Ronny Cuber’s full-bodied, magnetic baritone saxophone. Finally, Lonnie Smith and his group transform Leiber & Stoller’s and The Coasters’ Charlie Brown into a discourse on the art of breakbuilding. Drummer Sylvester Goshay fills spaces with exciting rolls. It is a very satisfying listening experience, simultanously relaxed and intense, and everyone’s solo’s are very ‘together.’ This could be said for the record in general.

Of the sidemen on this date, only Ronnie Cuber maintained in the spotlight on a regular basis. He has been well respected as one of the great modern players of the baritone saxophone and sideman to such diverse musicians as George Benson, Eddie Palmieri and Frank Zappa. Pittsburgh native Larry McGee has been under the radar ever since. Guitarist McGee played on Lonnie Smith’s Drives. Of fellow Steel City native Goshay and tenor player Rudy Jones virtually nothing beyond the scope of Move Your Hand is known.

However, on the basis of said recording one might say these men’s groovy credentials are undisputed.