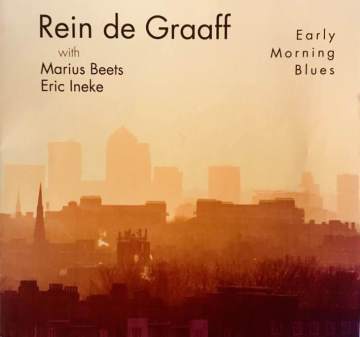 
Yes, that’s the bad news: De Graaff is retiring as a professional jazz musician. The good news: fifty years after his recording debut, the Groningen-born De Graaff delivers a jazz album that serves as but one example in his discography of the man’s masterly involvement in bebop and straight-ahead jazz. Self-acknowledged part of a small coterie of Last Of The Mohicans, De Graaff is of the opinion that straightforward jazz is hard to come by these days. No doubt, the fruitful, pre-crossover mainstream jazz landscape of the seventies and eighties, including countless playing venues and American legends carrying the flame, is by and large a thing of the past. Yet, considering the crowds that De Graaff has still drawn post-00, perhaps mostly consisting of elderly fans but also of a fair amount of youngsters, evidently the bop master has still inspired jazz aficionados and passed the peas to aspiring musicians one way or another. I was present at a rare jazz café appearance of De Graaff recently in The Hague – the 77-year old pianist usually appears strictly in jazz clubs and theatres – and noticed more than a few young lions eager to soak in everything De Graaff conjured up from the upright piano. To be sure, De Graaff has always made it his business to feature exceptional young talents on his tour schedules.

At said café Pavlov, De Graaff’s playing was remarkably fresh and energetic. Few human beings are as composed and level-headed as Rein de Graaff, who during a remarkable career as a leader and accompanist of countless legends like Dexter Gordon, Dizzy Gillespie, Hank Mobley and Johnny Griffin also was the owner of an electro ware wholesale company. His straightforward personality is reflected in logical phrases and musical stories. However, the blues and a certain edge are consistently present. Most likely, De Graaff has always reserved the fiery and sleazy side of the soul for his horn-like piano style, which was inspired so long ago by the work of Charlie Parker, Bud Powell, Hank Mobley, Lee Morgan, Hampton Hawes, among others.

Plenty of fire in the set of Early Morning Blues, which typically consists of standards and a couple of originals and contrafacts that are tailor-made for the tasteful, long-lined stories of De Graaff. It ranges from evergreens as Dear Old Stockholm, Avalon, Fly Me To The Moon and the unaccompanied Little Girl Blue, ballads that were transformed into bop anthems by Charlie Parker like Don’t Blame Me and Lover Man, bebop compositions as George Wallington’s Godchild and Benny Harris’s Wahoo and, finally, the De Graaff compositions These Are The Things, Early Morning Blues (The album features two takes of the down-home, supple slow blues) and Moonology.

The trio interaction is marvelous. European master drummer Eric Ineke has been De Graaff’s partner-in-swing for nearly fifty years, bassist Marius Beets is a versatile modern jazz man whose pocket and immaculate choice of notes reveal a passion for Ray Brown and has been with De Graaff since 1999. Multiple examples of the group’s striking flexibility are available, Avalon and Dear Old Stockholm being particularly enchanting. Nowadays one would be hard-pressed to find the kind of cocksure and authoritative introduction of a tune like the trio’s uptempo version of Avalon. The concise combination of drum rolls, bass patterns and quicksilver piano lines is like a shot of classic jazz, like hearing for instance, filtered through their distinct personalities, bits of Sonny Clark’s Trio LP with Paul Chambers and Philly Joe Jones. De Graaff’s sophisticated harmony and Ineke’s flexible approach of the beat considerably refreshes Dear Old Stockholm. It allows De Graaff the kind of freedom within a fixed set of changes that the pianist has always been comfortable with.

In this respect, De Graaff’s daring variations on the melody of Lover Man speak volumes. Right until the very end, the Rein de Graaff Trio is seriously takin’ care of business.