Young lions strengthen our belief in the future of real jazz. 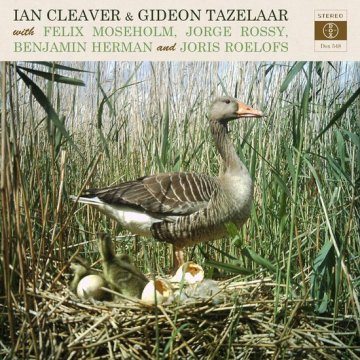 
Ian Cleaver and Gideon Tazelaar are like Vileda sponges. The exceptionally gifted millennials absorb all kinds of information and inspiration around the clock and, when squeezed, increasingly mature statements pour out. Tazelaar spent time in New York, graduating on Juilliard and practicing and playing with the likes of giant George Coleman. But subsequently, both friends took shelter on a tiny island at a big lake in The Netherlands, further honing their chops like Nature Boys among the sounds of the birds and fowl. Hence the brooding duck that’s pictured on the sleeve of Volume 1.

They debut as a co-leading duo on wax and besides bassist Felix Moseholm (also a Juilliard graduate and nephew to granduncle Erik whom assisted Eric Dolphy in the sixties) have recruited heavyweight Jorge Rossy. The Spanish drummer cooperated with, among others, Woody Shaw, Brad Meldhau and Joe Lovano. Former mentor and alto saxophonist Benjamin Herman and bass clarinetist Joris Roelofs guest on a couple of tunes.

Cleaver/Tazelaar & Co perform a diverse and carefully handpicked set of classic jazz with self-evident flair. One asset of Volume 1 is the natural feel for melody that Cleaver and Tazelaar share, sometimes sprightly unisono, at other times flexibly contrapuntal. Of the latter, Duke Ellington’s Love You Madly possesses a lovely old-timey, sultry vibe, featuring a bright and punchy solo by Cleaver. For this occasion, Killer Cleaver is a well-suited nickname, as the trumpeter enthusiastically throws himself into the battle with skills that are clearly not used for virtuosity’s sake and a sound as delightful as morning glory.

Best of all about Tazelaar is his relaxed articulation. Would one know nothing of his age, one would by listening to Volume 1 arguably guess that the tenor saxophonist on duty is a veteran and, no mistaking, in fine shape. His sound is warm and resonant. Collected but headstrong, Tazelaar takes on the breakneck tempo of Cole Porter’s It’s Alright With Me. Ultra-slow tempos separate the men from the boys and Tazelaar kills the slowest version of Hoagy Carmichael’s I Get Along Without You Very Well of late, a refreshing quartet effort that alternates between a flexible verse and a lightly swinging bridge.

Extra horns are the icing on the cake. The band creates high melodious drama of Oscar Pettiford’s Tamalpais, a mysterious piece that seems to reflect a visit of Ravel to Andalusia. Benjamin Herman feels like a fish in the water of Billy Taylor’s equally exotic Titoro. The capricious and sandpapered phrases of Joris Roelofs, definitely a European class act on bass clarinet, raise the bar on Misha Mengelberg’s post-bop classic Rollo II.

Any type of fowl will do on Volume 2, as long as we’re guaranteed that it’ll be in the making any time soon.