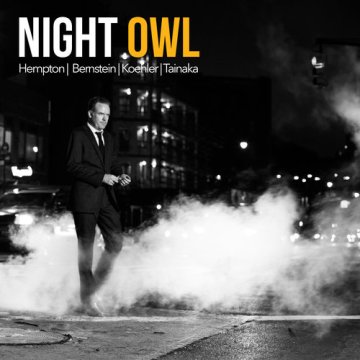 
Nick Hempton has been a fixture on the New York scene since 2004. Besides notable cooperations with Roy Hargrove, Joe Magnarelli and Peter Bernstein, the Australia-born tenor and alto saxophonist has released five albums as a leader, four of which were recorded with the Nick Hempton Band, a group that brought him to venues and festivals around the globe. Cherishing a particular passion for classic 60’s organ jazz, Hempton has finally come around to produce a full-blown session of the archetypical format of sax, Hammond organ, guitar and drums. Assisted by guitar maestro Peter Bernstein, organist Kyle Koehler and drummer Fukushi Tainaka, Hempton presents a set of blues-based original tunes like the shuffle grooves Night Owl and Macao Mood, boogaloo-ish Corner Bistro, the Latin-tinged tune I Remember Milady, the greasy backbeat-driven Listen Hard, Speak Easy and ballads I’m A Fool To Want You and It Shouldn’t Happen In Dreams.

Night Owl is a hot barbecue, its smells mingling with chatter and claxons on the corner of Lexington & 110th Street, neon signs keeping an eye on the hustlers, smoke rings swirling around the customers of the dingiest bar uptown, sax wailing… The nightlife, it ain’t no good life, but it’s my life… The album combines barroom excitement with modern jazz finesse, the blend that is the prerequisite for first-rate soul jazz. The sax playing of Hempton is firmly on the forefront and shades of Stanley Turrentine, Dexter Gordon, Lou Donaldson and a sleazy and husky bite complete the accessible style that is all Hempton’s own.

Bernstein is his customary crystalline, slightly angular yet melodic self, Koehler is a lively, tasteful player and Tainaka’s accompaniment is meaty and swinging – Tainaka’s resume includes stints with Lou Donaldson, Lonnie Smith and Melvin Rhyne. At one time, during After You’ve Gone, the band’s flow might remind you of the fluent bop groove of Sonny Stitt’s organ group with Don Patterson. Stitt, by the way, followed a long line of interpreters of the composition like Duke Ellington and Charlie Parker. Like his forefather, Hempton is the kind of guy that devours the harmonically active changes. A moment later the quartet delivers a slice of touching balladry. Hempton’s sweet-tart take on It Shouldn’t Happen In Dreams, subtle shifts of the beat underlining heartbreak and a sense of foreboding, is the mark of a thoroughly mature jazz musician. Night Owl is highly entertaining evidence of Hempton’s flexible and passionate approach of organ jazz.