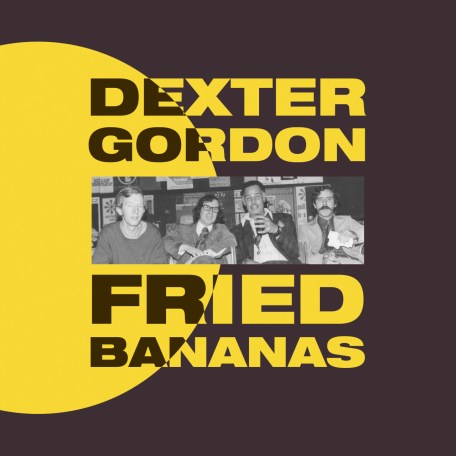 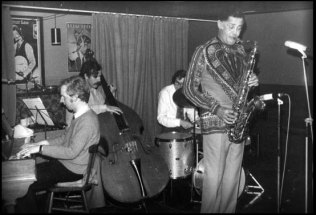 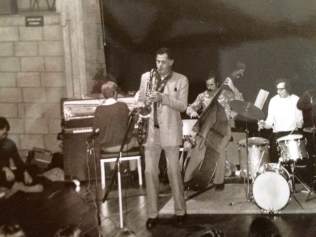 Dexter Gordon and his ‘working band’ in Enschede, The Netherlands

NEW RELEASE: DEXTER GORDON. In 1972, Dexter Gordon lived in Copenhagen and had been in Europe for ten years. He had usually toured the continent by picking local musicians, but in the early and mid-seventies Gordon commonly played with a Dutch ‘working band’ consisting of pianist Rein de Graaff, bassist Henk Haverhoek and drummer Eric Ineke. In the liner notes of the latest Gearbox vinyl release, Fried Bananas, Gordon’s widow, Maxine Gordon, remembers the expatriate tenor saxophonist being overjoyed by this touring deal. Dexter wrote to friends in Copenhagen: “This tour is quite fantastic; we are traveling through Holland, Germany, Luxembourg, Belge and France! It’s six weeks no, seven weeks and I’m getting rich! Anyway, it’s very well organized and seems to be a succes. For the most part I’m working with the same group…” Fried Bananas, a November 3, 1972 gig at the small town of Heemskerk in The Netherlands, recorded for a VPRO radio broadcast, shows Gordon in top form, relying on a tight-knit trio that knows the kind of muscular, bop-inflected music that the maestro plays inside out.

Typical of Dexter Gordon, the 49-year old tenor saxophonist throws himself headlong into his self-penned tune Fried Bananas, taking care of business from note one, telling a big-sounding tale full of behind-the-beat blues, witty asides, barks and wails and an imposing dose of hard bop mastery. He’s in no hurry, unfazed, relentless. The group answers the call of Dexter with zest. Rein de Graaff puts in excellent, flowing statements not unlike those of the former Gordon associate and fellow legend, Sonny Clark. Gordon charmingly introduces Body And Soul: “If you play tenor, you have to play this tune, haha.” It is, however, not often played like this, as the trio lays down a slow-midtempo bounce that brings back memories of the famous Coltrane version on Coltrane Sounds, courtesy of, among other things, Eric Ineke’s lithe counterpoint. Their avant-leaning approach gently nudges Gordon into alleys where carefree, frivolous notes have been waiting to get out of hiding. The other Gordon original, The Panther, was released on Gordon’s magnificent 1970 Prestige album The Panther. It’s a funky, beat-heavy blues, fruitful territory for Gordon’s cliché-free, forceful blowing.

In the early seventies, not only the major cities but almost every small town in The Netherlands had a club where jazz was hosted. Remarkable, from today’s viewpoint. The legendary Dexter Gordon graced a myriad of small venues like Societeit Progress in the Lowlands with his hard-boppin’, big-sounding artistry. The historical importance of this release to the Dexter Gordon and modern jazz legacy cannot be overstated.

Find the release in store here and check out the Gearbox website here.