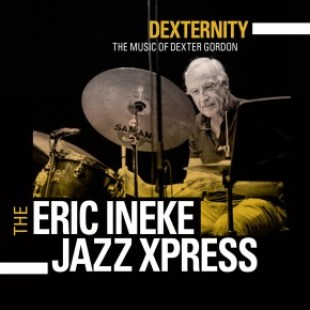 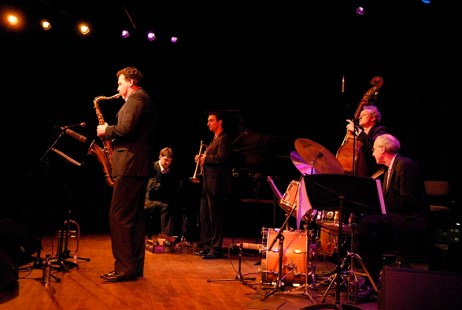 Dex, clearly, is in his bones. The 69-year old Ineke showcases a hard bop sensibility that permeades the entire set of Ineke’s group, which celebrated its ten-year anniversary this year. His ride gallops frivolously but steadily and his bass kick, single strokes and fills, in responsive sync with the fat-bottomed, tasteful double bass playing of long-time Ineke associate, bassist Marius Beets, ask urgent questions that their fellow members answer with zest: Sjoerd Dijkhuizen, a strong-toned tenorist who likes to reach for fluency in Mobley/Dex-fashion and in the tradition of Dutch hard bop pioneer Ferdinand Povel, has particularly alluring moments in Fried Bananas, taking gutsy left turns away from the changes, embellishing them with an occasional edgy overtone. Meanwhile, trumpeter Rik Mol accounts for a nice contrast with a cleaner, somewhat more understated kind of swing.

Ineke freely advocates his fondness for Elvin Jones-type cross rhythm in, for instance, the only non-Gordon tune on the album, Body And Soul (that, as Gordon professed, ‘should be played every night’). Lithe cross rhythm as part of the interaction with soloist Rob van Bavel, who puts in lines of exquisite cadence and breathy voicings. Van Bavel, subsequently, provides lyrical backing on the enchanting Gordon melody Tivoli, a platform for soothing soprano sax statements from Dijkhuizen and, not least, dense, intense harmony of soprano and trumpet. Together Dijkhuizen and Mol sound like sirens luring seamen from behind the rocky mountains of the Greek coast with their ephemeral melodies. Details like these add flavor to a supurb contemporary reading of the real deal, American jazz from the fifties and sixties.

Dexternity is The Eric Ineke JazzXpress’ sixth album released by Challenge/Daybreak on September 16. Find the link here. Liner notes by Maxine Gordon and Eric Ineke. Read my recent interview with Eric Ineke, who performed and recorded with a host of American legends, here.